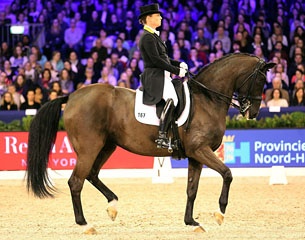 Following her World Cup qualifier victory in Amsterdam last weekend, Isabell Werth confirmed that the Oldenburg mare Weihegold has now been secured for her as a Rio hopeful ride.

In previous interviews Werth always stressed that her assistant trainer Beatrice Buchwald, who has predominantly campaigned the horse at FEI level, will maintain the ride on the 11-year old Weihegold (by Don Schufro x Sandro Hit) and that Isabell only hopped on occasionally to give the more routine and security at Grand Prix level.

However, the World Cup victory and their 83.450% kur score has now turned Weihegold into a clear German team prospect for the Rio Olympics for Werth to ride instead of student Buchwald.

Beatrice's highest international Grand Prix score on Weihegold so far is 74.720% (2015 CDI Oldenburg). Their highest Grand Prix Special mark is 75.961% (2015 CDI Frankfurt). With Werth on board, the black mare immediately scored 75.920% in the Grand Prix at the CDI-W Amsterdam.

Weihegold is bred by Inge Bastian and owned by Christine Arns-Krogmann. She has bred numerous embrytransfer foals out of this mare. In Amsterdam Werth confirmed that her long-time sponsor Madeleine Winter-Schulze has now secured the horse for her.

"They (Arns-Krogman) have found a solution together with Madeleine to keep the horse for me to ride," said Werth. "There have been many offers to buy her, but in the end there is a good solution between the owners and Madeleine who is always very happy to help - it’s all about team-work. With Madeleine I am very close - she is always at our side, and at my side."

Weihegold's owner Christine Arns-Krogmann told Eurodressage that "we are still the owner of Weihegold as before. Together with Madeleine Winter-Schulze and the Klaus Rheinberger foundation we found a solution to keep Weihegold in Stable Werth where she can be trained further. We are happy about our future collaboration with team Werth."

The ride on Weihegold will depend on how well Werth's other horses develop (Don Johnson, Emilio) during the 2016 show season as well as on the progress the combination Werth-Weihegold can make. Buchwald will still get a chance to ride Weihegold, but needs to be able to position herself amongst Germany's four best combinations in order to be considered for the Olympic team. Werth retains the option that Weihegold might be her Rio choice if she becomes Isabell's top scoring horse. Not a word has been mentioned about Bella Rose, who has been struggling with injuries since August 2014.

"She (Weihegold) is a clear option for the German team and the Olympics now," said Werth. "I ride her to give her my experience, but Bea will continue to ride her as well and we will try all options to find the strongest combination for Rio. I’m really happy to have such a strong team of horses."

Werth and Weihegold will compete next at the 2016 World Cup Qualifier in Neumunster, Germany, on 18 - 21 February.