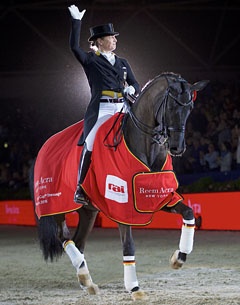 Isabell Werth created quite a stir when winning the seventh leg of the World Cup™ Dressage 2015/2016 Western European League at the sold-out RAI Arena in Amsterdam (NED) on Saturday 30 January 2016 with Weihegold. The lovely mare was competing in her very first international Freestyle, but in the hands of the 46-year-old German athlete who includes six Olympic gold medals and two World Cup titles amongst her career highlights, the 11-year-old horse posted a spectacular score in the early stages of the competition and could not be beaten.

The pair’s success was all the more remarkable for the fact that today’s class was of an exceptionally high standard, with top riders really raising their game in the battle for points towards the World Cup Final in Gothenburg (SWE) in March. Werth admitted afterwards that her victory was unexpected.

“It was a surprise because the Freestyle is really difficult here in this atmosphere in Amsterdam, and there was an outstanding field of competitors. You know how it is in Freestyle, we did not have the best starting order so I was not expecting to win, but at the end of our test I felt really sure and safe - I’m so very, very happy!” she said.

Yesterday’s Grand Prix was dominated by the home contingent, 2010 World Cup™ Dressage champion Edward Gal leading the way with Voice followed by van Silfhout in second and Hans Peter Minderhoud and Flirt in third. This was also a tough day of sport, with a total of 22 starters and only 15 qualifying spots on offer for today’s Freestyle. Werth and Weihegold had to settle for sixth place yesterday, so they had it all to do when they stepped into the arena this afternoon. But they posted an amazing 83.450 when sixth to go, their score boosted by artistic marks of 90.00 from judges Francis Verbeek van Rooy (NED) and Stephen Clarke (GBR). 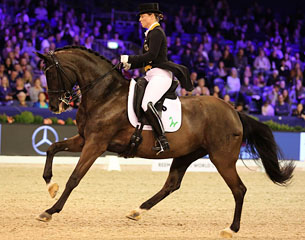 In an intricate test that oozed willingness, energy and focus, Weihegold showed effortless piaffe, lovely extended trot and passage and strong canterwork. And the big smile on the face of Werth’s great patron, Madeleine Winter-Schulze, as she watched from the sidelines was reflected by the rider who could be seen to go - “Oh Wow!” - as she drew to a halt with the black mare which is owned by Christine Ams-Krogmann.

Werth knew she had put it up to the rest of the field, but there was still a long way to go and she had a tantalising wait as they tried to overtake her.

Sweden’s Patrik Kittel produced an extraordinary test from the rejuvenated 17-year-old Scandic who looks super-fit and is still clearly enjoying his work at this late stage in his career. Bouncing off the ground during his trademark passage, the chestnut stallion posted 79.950 to go into second place, but there would be a lot more movement on the leaderboard before the end of the day.

Gal and Voice demoted them from runner-up spot when scoring 82.100, only to be overtaken by van Silfhout and Arlando who posted 82.750 when next into the ring. But it was the penultimate partnership of von Bredow-Werndl and Unee BB, third-place finishers at last year’s World Cup Final in Las Vegas (USA), who would finally earn that second spot when awarded 83.250 for a charming performance.

“Unee is in very good form, and one day I will manage to get everything from the warm-up into arena - that’s my goal!” said von Bredow-Werndl afterwards.

The spotlight however belonged to Werth and the mare who has been ridden for most of her career by the German rider’s assistant trainer, Beatrice Buchwald. Werth explained today that it was always planned that she would take over the ride when the horse had enough experience.

“She (Weihegold) is a clear option for the German team and the Olympics now. I ride her to give her my experience, but Bea will continue to ride her as well and we will try all options to find the strongest combination for Rio. I’m really happy to have such a strong team of horses”, Werth said.

She talked about the arrangement that has been reached between the mare’s owners and her long-time patron.  “They have found a solution together with Madeleine (Winter-Schulze) to keep the horse for me to ride. There have been many offers to buy her, but in the end there is a good solution between the owners and Madeleine who is always very happy to help - it’s all about team-work. With Madeleine I am very close - she is always at our side, and at my side,” said the German star.

Werth is now considering taking Weihegold to the penultimate World Cup qualifier in Neumunster (GER) in three weeks’ time before bringing Don Johnson, with whom she topped the fifth qualifier in Salzburg (AUT) last month, to the last qualifying leg in s’Hertogenbosch (NED) in March.

“My goal with Weihegold is to improve more and more. She is only 11 years old, she is very elegant and she has lots of room for improvement - she is a very exciting horse”, Werth said.

by Louise Parkes for the FEI, edited by Eurodressage