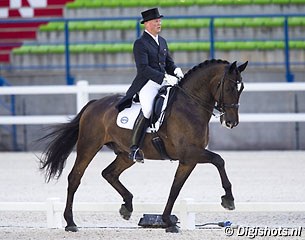 For Grand Prix rider Christian Zimmermann the road to Rio leads through Wellington, Florida. The German born dressage rider competes for Palestine and seeks to consolidate his number one position on the Olympic Riders Ranking in Group F by competing at the 2016 Global Dressage Festival.

Zimmermann represented Palestine at the 2014 World Equestrian Games in Caen, France, and now seeks to be the first Palestinian dressage rider to make it to the Olympic Games.

Zimmermann's main iron in the fire is the experienced, 17-year old American bred Holsteiner gelding Cinco de Mayo (by Coriander x Alcatraz). With 700 points they are leading in Group F (Africa/Middle East) on the Olympic Riders Ranking. The Cologne based entrepreneur and his dark bay gelding last proved their form at 2015 CDI Salzburg in December, where they scored 66.400% in the Grand Prix and 68.875% in the Freestyle.

After an intensive winter training campaign with coach Henri Ruoste, they aim to up the ante in Wellington, Florida.

"We are now flying to Wellington to defend our position in Group F and hopefully extend the gap with the number two," Zimmermann explained. "Cinco is in super form and I feel we can krack the 70% in Florida. We are both going to put our best foot forward." Ruoste will be commuting between Germany and Florida to assist Christian at each competition. At home in Iserlohn, Germany, Henri will prepare Christian's second Grand Prix horse Roble AR (by Ravallo x Donnerschwee) for some national classes. He will put mileage on the Hanoverian gelding, whose talent and potential has been carefully nurtured and show schedule limited to let the horse mature at Grand Prix level.

Christian's second partner-in-crime for the Wellington adventure is his brand new super star Aramis, an 11-year old Dutch warmblood gelding by Scandic x Papillon, which Christian discovered and bought in the US a year ago.

"Aramis is a dream come true," said an ecstatic Zimmermann. "I'm bringing him for training and will only start showing him when I feel he's ready. Aramis is super strong in his body and mind, super sensitive, and shows amazing Grand Prix movements, like his sire Scandic."

Christian admitted that for a start he probably will get his feet wet on Aramis in the 3* big tour. However, he wants to leave all options open and not pressure this budding talent, who is the star for the future.

"It could very well be that we will begin competing him only in April. I'm not pushing him and not setting any competition date in stone," Christian explained. "The main goal with Aramis is for him to get used to an electric show atmosphere and get confirmed at Grand Prix so he can follow in Cinco's footsteps."