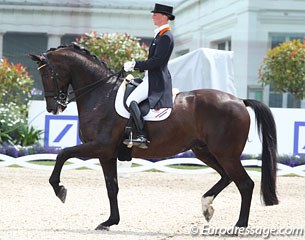 The Bartels' family and a group of sponsors acquired Toots (by Jazz) in 2010 as Imke's 2012 London Olympic hopeful. The pair started to compete internationally at small tour level in 2010 and made its international Grand Prix debut in April 2012 at the CDI Addington. The combination missed out on a Dutch Olympic team spot, but continued to compete in the winter of 2013.

At the 2013 CDI-W 's Hertogenbosch, Schellekens and Toots had to withdrew before the Grand Prix because of an allergic reaction which made the horse cough. This allergy alongside other health issues kept the horse away from the show ring and in rehabilition for more than two years. Schellekens only just made her international come back on the 1.88m standing Toots at the CDI Roosendaal Indoor at the beginning of December. Imke is currently pregnant with her first child.

"Partly because of Imke's pregnancy a qualification for Rio was less realistic this year," Bartels stated. "Imke has decided to sell him in good agreement with the owners, so that he still has a chance to qualify for Rio. Toots will remain in his stall at Bartels Academy where Imke will coach the new combination."