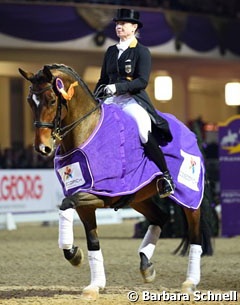 Eurodressage's German photography correspondent Barbara Schnell travelled to Frankfurt, Germany, last weekend to cover the Sunday action at the 2015 CDI Frankfurt where the Louisdor Cup Finals and the CDI 4* Grand Prix Kur to Music were scheduled to take place. Isabell Werth claimed the day winning the developing Grand Prix horse finals on Emilio and the GP freestyle on El Santo.

Isabell Werth, who is Germany's most successful dressage rider ever, won the Louisdor Cup Finals on the Westfalian registered Emilio (by Ehrenpreis x Cacir AA), who was initially started as a youngster by her then-assistant trainer Matthias Bouten. Werth had only shown the bay gelding in seven classes so far of which two were at CDi's (2014 CDI Odense at small tour and 2015 CDI Perl at big tour level).

Aboard her long-time partner El Santo (by Ehrentusch x Rhythmus) she won the kur to music with 79.725%, quite ahead of second placed pair Sanneke Rothenberger on Deveraux (by De Niro x Rohdiamant) who posted a score of 76.775%.