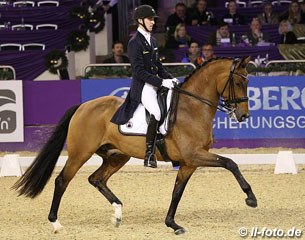 Sönke Rothenberger and the Dutch warmblood Cosmo became the winners of the warm-up class for the 2015 Louisdor Cup Finals for developing Grand Prix horses, which take place this weekend at the 2015 CDI Frankfurt. The warm-up class consisted of the Intermediaire II and was held on Friday noon 18 December 2015. Rothenberger scored 76.186%, only a fraction more than runner-up Isabell Werth on Emilio (76.163%).

Rothenberger and his young 8-year old Cosmo (by Van Gogh x Landjonker) rode a very nice test in which the horse's potential and suppleness stood out. While the bright bay gelding was sharp and quite focused on his surroundings, he did show off good work. The trot extensions were massive, the half passes scopey. In the first passage there was more left hindleg activity, but that improved in the second and third passage. The piaffe is still quite small and three times the horse travelled a bit too much forward, but the rhythm was there. The horse got tense in the corner in the collected walk, but the canter extension that followed was impressive. There was a mistake in the two tempi's but the ones were outstanding and probably the highlight of the test. The right pirouette was the best one of the two, yet slightly big. The horse stood in a stretched position in the end halt. 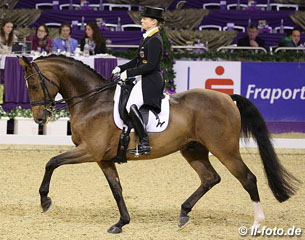 Isabell Werth landed second place on her 9-year old Westfalian gelding Emilio (by Ehrenpreis x Cacir AA). This bay gelding has been one of Isabell's surprize horses and only has very few shows down his belt. However Emilio is already proving himself to be a very reliable Grand Prix horse. The bay is built with a slightly sunken back and croup high which does not work in his advantage. He has amazing spring in his step in passage but never truly moves the hindlegs under the body, despite good regularity. In the piaffe he also masters the rhythm very well, stays on the spot and picks up his feet highly, but he leans much on the forehand. The transitions in the second pi-pa were exceptional. The extended walk was very relaxed with good overtrack, but the collected walk got short and tense with the horse not even stepping in the footprint of his front hooves. The extended canter was lovely but the flying change at the end of the diagonal went totally wrong. The left pirouette was more a small circle, the right one was much better. The two tempi's were super solid, but there was a mistake in the ones, which already looked laboured at the beginning of the diagonal. The last piaffe at X was the best one of the three. 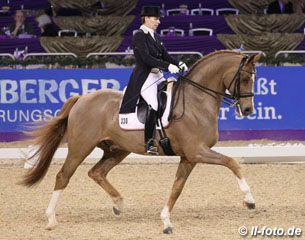 Susan Pape and the American owned Fiorano (by Rousseau x Rotspon) landed third spot with 72.233%. The chestnut gelding is a very talented Grand Prix horse but overall he was not as steady in the head position. While the horse showed much class in the movements, it all looked slightly laboured and there were often glitches in the overall smoothness and flow in the paces and exercises. Nevertheless Fiorano is a very gifted horse and certainly one to watch in the Louisdor Cup Finals on Sunday 20 December 2015.