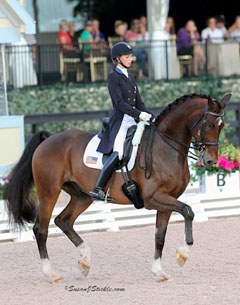 Laura Graves and her Dutch warmblood Verdades are sitting atop the leaderboard after the first round out of three in the hotly contested Grand Prix Championship at the 2015 U.S. Dressage Championships held in Wellington, Florida, on 9 - 13 December 2015. With
a full field that includes some of the nation’s top combinations, the
Grand Prix division witnessed a group of 17 riders perform the Grand Prix
Test for the first 45% of their championship score.

Graves and her 13-year old Verdades (by Florett As) competed in five international shows this 2015 competition year, including the 2015 World Cup Finals in Las Vegas and 2015 Pan American Games in Toronto. The Geneva, Florida based Graves is Steffen Peters' biggest rival for the title and she took an early lead in the Nationals with a Grand Prix test that, despite a few bobbles, earned a 76.460% from the ground jury of Linda Zang, Peter Holler, Christof Umbach, Gary Rockwell, and Hans-Christian Matthiesen. 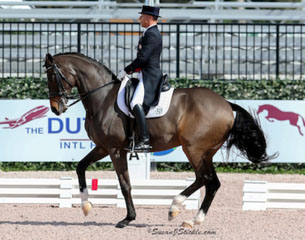 “It was our first time back in the ring [since the Pan American Games in July] and I was expecting to have to knock some rust off and as it turns out I was the one with the rust," said Graves. "He did everything I asked, I am now having to keep up with him. He felt fresh and just the way I like him, I just didn’t quite keep up. I was really happy with our zig-zag; he has incredible ability to cover ground sideways. All of our canter work was really solid – I think we picked up a lot of points there.”

The 2014 Grand Prix National Champion, Steffen Peters (San Diego, Calif.), placed both Four Winds Farms’ horses in the top three – finishing second on Legolas (by Laomedon x Florestan II) on a score of 74.220% and third with Rosamunde (by Rock Forever x Fidermark) on a score of 72.620%. 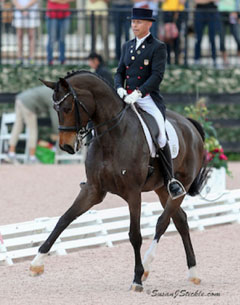