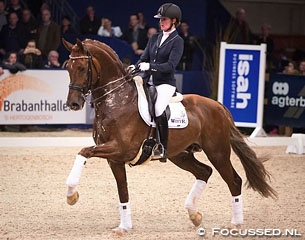 A huge amount of 604 young colts have been entered to be presented at the pre-selection days for the 2016 KWPN Stallion Licensing, which takes place annually in 's Hertogenbosch, The Netherlands at the beginning of February.

The dressage pre-selection days are from 9 - 12 December at the KWPN headquarters in Ermelo, The Netherlands. Of the 604 entered colts, 265 are dressage bred.

This year the top represented sire with colts entered for the pre-selection is Charmeur (by Florencio x Jazz). No less than 24 sons are scheduled to make an appearance. The second best represented sire is Apache (by UB40 x Krack C) with 21 sons enetered.