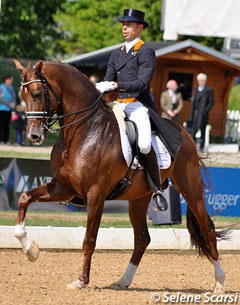 Vivaldi is the best represented sire amongst the dressage candidates registered for the pre-selection days for the 2013 KWPN Stallion Licensing in 's Hertogenbosch, The Netherlands in February 2013.

The 2013 KWPN Licensing pre-selection days start on Wednesday 5 December 2012 and the dressage candidates are split into three groups. They have to appear on 6, 7 and 8 December 2012 in Ermelo, The Netherlands, where they can obtain a ticket for the Licensing in February.

With 17 sons entered to appear at the pre-selection Vivaldi (by Krack C x Jazz) is the best represented sire. He has Uphill (by Oscar x Apollonios xx) on his heels with 15 sons.

KWPN licensing Champions Ampere (by Rousseau x Flemmingh) and Bordeaux (by United x Gribaldi) are both strongly represented by 12 and 11 sons. The stallion Apache (by UB40 x Krack C), who made his name as a stallion mainly through sport, also has 11 offspring at the pre-selection.

Quite a large group of young colts have German or Danish sires. The D-line is well represented by sires such as Damon Hill, De Niro, Desperados, Don Schufro and Don Romantic, while there are also quite a few F-line colts entered by Florencio, Furst Romancier, Furstenball and Furst Nymphenburg. For the S-blood two direct Sandro Hits and four Sir Donnerhalls are scheduled to appear.

Complete list of entered stallions can be seen here.