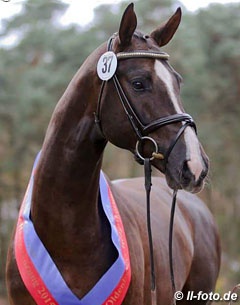 Bonds, a liver chestnut colt by Benicio x Sir Donnerhall I x Rubinstein, was named champion of the 2015 Oldenburg Stallion Licensing which took place at the Oldenburg headquarters in Vechta, Germany, on 19 - 21 November 2015.

Bonds, who was first named Bloomingdale but then his name got changed to Bonds, is bred by Katharina Pschertz and is owned by Wilhelm Sieverding and Anna Haase. The modern and athletic looking Bonds excelled with his fabulous trot: lots of knee, push from behind with good flexion of the hocks and swing through the body. The trot could have been a bit more forward oriented in the stretch of the limbs, but overall this "round" and elastic trot was highly impressive. The walk was ok, but the horse could have had more ground cover and slightly a bit more stride to fulfil the "complete package" of a licensing champion.

Bonds was also the catch of the weekend during the auction following the licensing. He became the price highlight selling for 500,000 euro to a syndicate including the Belgian HC Stables and the German Gestut Famos. The horse will be trained and competed by Anna Sophie Fiebelkorn. The 2015 Oldenburg Licensing was quite Dutch warmblood infused with six KWPN registerd colts of 33 participating. Twenty-one stallions were approved for breeding, seven of them were proclaimed premium stallions.

The licensing committee proclaimed Andreas Helgstrand and Udo Wagner's dark bay Foundation x Del Martino x Eskardo x De Niro the reserve champion of the licensing. Bred by Franz-Josef Wieghaus-Vorwerk out of a Hanoverian dam line, this heavy, muscled young colt showed powerful gaits, especially in the uphill canter. In trot he was extremely cadenced and rhythmical but slow from behind. This stallion has much lift in the shoulder and withers.  The walk could have been more supple. He sold for 320,000 euro at auction and was listed to be sold to The Netherlands, but rumours have it that Helgstrand bought the colt back. 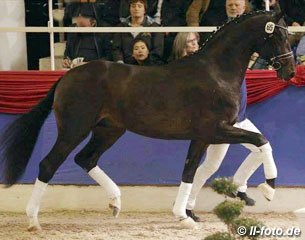 The committee surprisingly put Arnd Schwierking and Heinrich Giesselmann's dark bay Sir Donnerhall I x Welt Hit II x Grunstein I colt in third place in the premium ring. This stallion was absolutely gorgeous with a fantastic neck and face. He was beautiful in front, but quite long in the back and the engagement from behind was not as impressive. He also paced in walk! His looks and fantastic dam line seemed to have been the decisive factors. He sold for 90,000 euro to Andreas Helgstrand.

Number four was Gestut Peterhof's Sezuan x Licotus x Harvard x Davignon I. The dark bay colt from Sezuan's first breeding year showed that peculiar hindleg/hock movement that Sezuan has himself. The trot was lightfooted with quick engagement from behind but the hocks are always pulled tight and up. The walk was good, the canter should have shown more suppleness. The colt sold for 90,000 euro to Denmark. 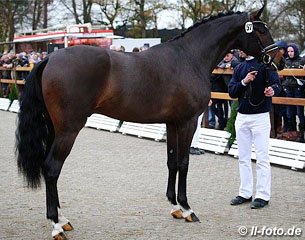 Lone Boegh Henriksen's For Fascination (by Furst Romancier x Sir Donnerhall x Don Schufro) landed fifth place in the premium ring. The gorgeous bay stallion is the full brother to licensing champion For Romance and was one of the more typey, modern looking stallions at the licensing. The horse had a beautiful self carriage, much push from behind and elasticity. In walk, however, the horse got wide behind and his right hind consistently moved out from under his body. For the Future was not for sale.

The prettiest stallion in the entire collection was the sixth ranked premium stallion For Final, a black For Romance x Dimaggio x Lancier x Woermann offspring, bred by Sarah Kohl and owned by Dressage Performance Centre Lodbergen, which also owns sire For Romance. The black colt had a very lightfooted trot with much self carriage rhythm although the hindlegs could move more towards to point of gravity. He gets a bit croup high while trotting. The walk was exceptional. He was not for sale. 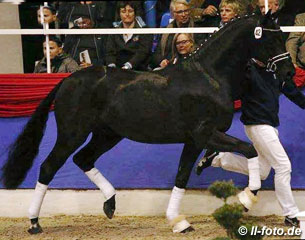 The seventh ranked premium stallion was Damian (by Damsey x Florencio x Rohdiamant x Grandeur), bred by Christian Orth and owned by Swedish Johan Ifverson and Danish Andreas Helgstrand. The black colt is a beautiful type with a lovely cadance in trot and elegant in front, but he moved the hind legs out a bit and could flex the hindlegs more underneath the body. The walk was very good. Damian was not for sale.

At the auction several licensed colts fetched excellent prices. One of the most striking colts was the dark bay Valentino (by Vitalis x Sandro Hit x Weltmeyer) who did not make it to the premium ring because he's Westfalian registered. The trot was very soft and floating while being quick and strong from behind. The bay had much swing through the body. The walk was good. He sold at the auction for 250,000 euro but the buyer never signed the contract and then the horse sold privately right afterwards for 205,000 euro to Marion Wilimzig.  His auction sales price, however, made it to official sales list which upped the overall average without reflecting reality. 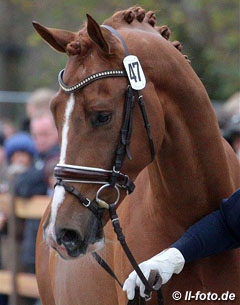 The KWPN bred Ibiza (by Desperado x Jazz x Contango) snorted his way through the licensing. In freedom he barely showed a trot but cantered around non-stop. In hand he had very good cadance and the walk was good. The owner apparently bought Ibiza back for 170,000 euro.  The KWPN bred Innuendo (by Charmeur x Ferro x Havidoff) had a fantastic movement mechanism but remained very stiff in the top line. He had a slightly long back but lots of flash in his legs. He sold for 150,000 euro to Hof Kasselmann. Austrian Peter Gmoser acquired the interesting Don Jon (by Don Juan de Hus x Benetton Dream) for 75,000 euro. The chestnut was quite heavy for his age but showed great potential as a sport horse.

There were also a few remarkable gradings of stallions who got permission to breed but were simply not having their day at the Oldenburg licensing. There were positive verdichts for the ponyesque, limited De Koonig x Ferro, the black Desperado x Wynton with no walk, the cart horse mover by Millienium x Furst Heinrich, and Furstenglanz (by Furst Wilhelm x Ron William) with his sunken back, trot in two parts (but good walk). The latter sold at as a foal at the Vechta auction for 100,000 euro and now at as a 2.5 year old to Gestut Birkhof for 95,000 euro. The approval of the gigantic (172 cm, born in June 2013), short-backed, hasty liver chestnut Zack x De Niro x Rubinstein was baffling.