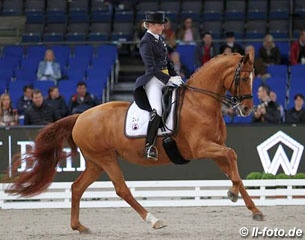 Sanneke Rothenberger and the 16-year old Hanoverian mare Wolke Sieben became the winners of the 2015 Piaff Forderpreis Finals for German Under 25 riders held during the 2015 CDI-W Stuttgart on 19 - 22 November 2015. Rothenberger reigned supreme in both the Short Grand Prix and Finals Grand Prix test.

After qualifing for the Piaff Forderpreis Finals four years in a row and placing third at the 2014 Finals, the 23-year old Rothenberger and Wolke Sieben (by Wolkenstein II x Hitchcock) made the championships their own this year. The pair scored a winning 72.581% in the warm up round, the short Grand Prix. They won the title by scoring 70.500% in the regular Grand Prix the next day.

Rothenberger has been a routinier at Grand Prix level, competing on the Under 25 circuit since 2012 and in the senior division since 2013. Wolke Sieben was her 2012 European Young Riders Championship ride with whom she won silver. Since 2014 the chestnut mare has been her Grand Prix ride with a few international starts in Vidauban, Stadl Paura and Hagen the past two years.

Sanneke has focused the mare on the German Under 25 circuit and her dedication paid off in Stuttgart by winning the 2015 Piaff Forderpreis. 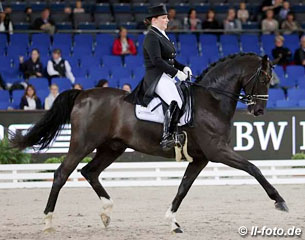 "I noticed that it would be a bit more difficult in the finals test," Rothenberger said after the Grand Prix. "Yesterday (in the short GP) Wolke felt even better in the indoor arena, but she really made an effort again and always wants to give more than she has to." German Grand Prix team trainer Monica Theodorescu was pleased with Rothenberger's results. "She made her experience count," said Theodorescu.

Rothenberger felt the most competition from Juliette Piotrowski on her 10-year old  Oldenburg bred Sir Diamond (by Sandro Hit), who was her biggest challenger during the Piaff show circuit this spring and summer. Piotrowski landed second place in Stuttgart with 69.300% in the Grand Prix.