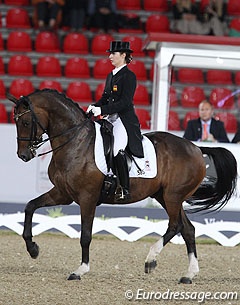 Don Lorean is a 15-year old Oldenburg gelding by Don Larino x Rouletto x Barsoi xx. The bay gelding was discovered as a 2,5-year old licensed stallion in Vechta, Germany, and trained to international Grand Prix level by British team rider Fiona Bigwood, who sold the horse to the Barbançon Mestre family in 2013.

Yuko Kitai is the 2012 Japanese Dressage Champion and her most recent number one Grand Prix horse was the chestnut gelding Golden Coin (by Weltrang L x Donnerhall). The 42-year old Kitai runs an equestrian centre Hazienda in Tokyo, together with her show jumping brother Kazuteru Kitai.

"This new duo will overcome new challenges in the dressage world. Her big goal is to secure the Grand Prix horse for the 2016 Olmpic Games," said Kitai's press officer.  "Yuko will be trained by Thomas Wagner. The horse will be relocated next week to his stable in preparation of the Olympic Games."

The new duo has planned to make its show debut at the 2015 CDI Frankfurt in December. Japan qualified a team for the Rio Olympics at the CDI Perl-Borg  team qualifier in September.