Imperio and Axis, Trakehner Stallions of the Year 2015 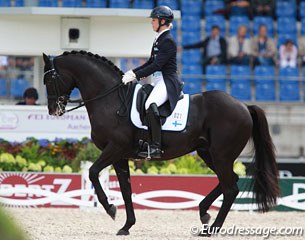 The 12-year old bay stallion Imperio (by Connery x Balfour xx) is bred by Hartmut Keunecke. He was the 2008 Bundeschampion and reserve world young horse champion under Anna Sophie Fiebelkorn and since 2011 he is trained by Hubertus Schmidt. They moved to Grand Prix level in 2014 and this year the horse came of age at international Grand Prix level. Imperio was in the running for a German team spot for the 2015 European Championships.