Roller Coaster to Victory for Bache and Fasine at 2015 Bundeschampionate 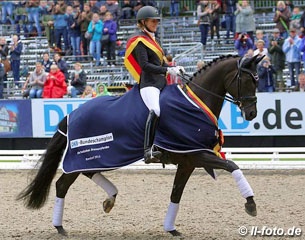 It was a roller coaster to victory for Norwegian rider Isabel Bache and Paul Schockemohle's Oldenburg mare Fasine in the 6-year old division at the 2015 Bundeschampionate in Warendorf, Germany, on Saturday 5 September 2015. After placing thirteenth in the preliminary round, the pair had to earn its ticket to the finals via the consolation class. The feat has been done before by other pairs. Fasine did it by transforming an initial 7.2 score into a whopping 9.3 for the title. 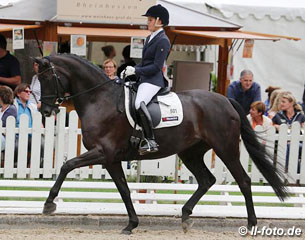 The silver medal went to Carola Koppelmann and the dark bay Rhinelander mare Lady Loxley M (by Lord Loxley x Abanos). The pair already represented Germany four weeks ago at the 2015 World Young Horse Championships and in Warendorf they won silver with a 8.8 total score. The mare got 8.5 for trot and canter, and 9 for walk, submission and general impression.

The Krefeld based Heiner Schiergen landed the bronze medal aboard Christian Becks' Damon's Dejaron (by Damon Hill x Match AA). The Westfalian stallion scored a total of 8.6 with  8 for trot, 9 for walk and canter and 8.5 for submission and general impression. 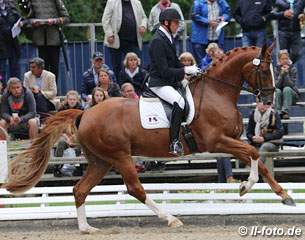 Stefanie Wolf was pushed off the podium by Schiergen as Wolf finished on an 8.4 total score aboard Saphira Royal NG (by San Amour x Monteverdi). The winner of the qualifier, Julia Katharina von Platen on the Hanoverian mare Danza (by Dimaggio x Rubin Royal) could not produce the same level of swing and engagement and finished in fifth place with 8.3. They tied with Lisa Lindner on Quotenkonig (by Quaterback x Furst Piccolo).