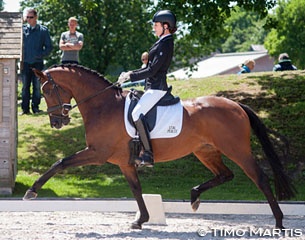 The Australian equestrian federation has announced that Australia will be represented by one horse-and-rider combination at the 2015 World Championships for Young Dressage Horses in Verden, Germany, on 5 - 9 August 2015.

The 25-year old Simone Pearce, who hails from Victoria but is based in Europe, will be competed the Dutch warmblood mare Felicia in the 5-year old division.

Felicia is by Vivaldi x Rossini x Purioso. The bay mare is owned by the Dutch Stal Perlee in partnership with the rider. Pearce has been based in Europe for the past five years and has been located at several places, from Bremen (GER), to Riel (NED), back to Dinklage (GER) and now in Tönisvorst (GER) with Warwick McLean. She regularly commutes to Stal Perlee in The Netherlands where she trains a number of horses.

"I am very honoured to have just been given my official Australian representative flags," Pearce commented on her Verden selection. "For me there is no bigger recognition of my perseverance and achievements that to gain recognition on such a high level from my country."