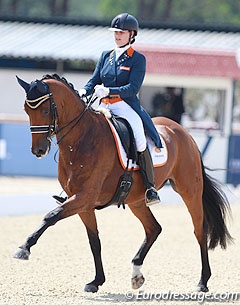 Van Lierop received the ride on the 10-year old Oldenburg mare Equestricons Walkure (by Romanov x Donnerschwee) from the horse's owner, German horse dealer Jochen Arl. The agreement was made for the entire 2015 show season up until the 2015 European Young Riders Championships in France.

While Van Lierop was still hoping to compete the horse at the 2015 Dutch Dressage Championships in Ermelo, The Netherlands, on 17 - 19 July 2015, the owner decided not to extend the agreement after Vidauban as for him the priority lies with the mare making the transition to Grand Prix level in the next few months. 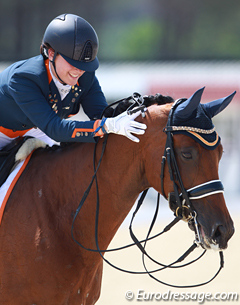 Van Lierop and Walkure were highly successful this season, sweeping every single class they competed in at the 2015 CDI in Wellington, Florida. They also won two classes at the 2015 CDI Nieuw en St Joosland and were second in the team test at the CDI Roosendaal and CDI Compiegne.  They won the Dutch national KNHS MDH-Kostendrukkers Young Riders Cup in Etten-Leur, The Netherlands, before heading to Vidauban where they won the team and individual test and were second in the Kur with scored of 76.500%, 77.447% and 81.225%.

"The mare has clear talent for Grand Prix and I want to develop her towards the big tour," Arl explained to Eurodressage. "The entire Dutch team, including team trainer Tineke Bartels, expressed their gratitude for making Walkure available for the Dutch young riders' team this year. I love to support young riders to achieve the top of their potential on my horses, but Grand Prix is always the ultimate goal."