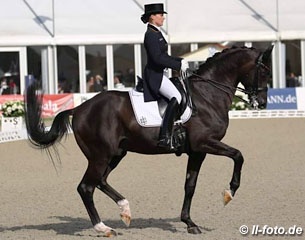 Hof Kasselmann in Hagen at the Teuroburger forest took over the organisation of the only Nations' Cup taking place annually in Germany when the venue of Aachen announced its intention not to host the CDIO in 2015 because it is already staging the 2015 European Dressage Championships in August. Show organizer and dressage horse dealer Ullrich Kasselmann and his expert team took over the job and have created an event exceding all expectations. With the dressage ring located in the main show jumping stadium at Hof Kasselmann, the CDIO Hagen now has the exact same feel at the European Championships which were hosted there ten years ago in 2005 and feels like a proper Championship venue.

Sprehe had Desperados on excellent form once again. After winning the 2015 German Dressage Championships in Balve one month ago, the pair has now firmly established itself as Germany's best scoring Grand Prix combination. In Hagen they confirmed that position with their winning score of 81.160, a personal best.  The black stallion looked fit, strong and powerful and made no major mistakes. The flying change at the end of the extended canter could have been better and a few steps of passage on the centerline were uneven, but the rest of the test was high class. 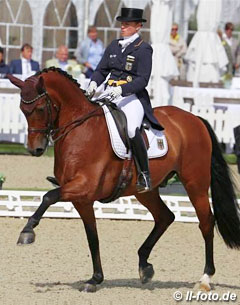 Team Germany scored a total of 235.280% for the win in the Nations Cup. All three German team riders topped the ranking with Isabell Werth finishing second individually aboard Madeleine Winter-Schulze's 13-year old Hanoverian gelding Don Johnson (by Don Frederico x Warkant) with 77.440%. The bright bay gelding was obedient and remained solid throughout the test, only lacking some ground cover in the one tempi changes.

Jessica von Bredow-Werndl and Beatrice Buchler-Keller's 14-year old Dutch stallion Unee BB (by Gribaldi x Dageraad) landed third place with 76.680%. Von Bredow produced a very strong ride with only one big mistake, an unscripted flying change in the extended canter.  The extended trots were less hurried and the horse has improved in his self carriage and head position.

The highest ranked non-German rider in the CDIO Grand Prix was Danish Anna Kasprzak who also secured Denmark's second place in the Nations' Cup. Aboard her 16-year old Finnish warmblood Donnperignon (by Donnerhall x Mozart II) Kasprzak did not score lower than a 7.0 for any of the movements in the test. Her total brought Denmark's team score to 219.620%, assisted by Daniel Bachmann's 71.900% and Mikala Gundersen's 71.720%.

The Spanish team finished in third place with Beatriz Ferrer-Salt on the 14-year old Westfalian gelding Delgado (by De Niro x Weltmeyer) spearheading the team with 75.180% and a 6th individual place. The Spanish team also had counting scores from Jose Daniel Martin Dockx on Grandioso (71.620%) and Claudio Castillo on Alcaide (68.980%).

The 2015 CDIO Hagen kicked off in the morning of Thursday 9 July with a 1* Prix St Georges class. Matthias Rath and the 8-year old Oldenburg gelding Danönchen (by Danone I x Rohdiamant) topped the leader board with a whopping 76.079%. He edged out Laura Tomlinson on her new ride, the 8-year old Dutch stallion Capri Sonne JR (by Rhodium x San Remo) who scored 74.684%.  Anabel Balkenhol and the 8-year old Trakehner stallion Heuberger (by Imperio x Michelangelo) completed the top three with a 73.789% score.