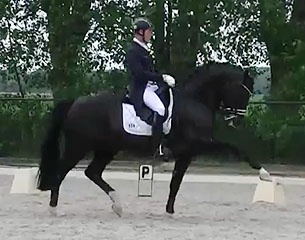 Matthias Rath and the 15-year old Dutch stallion Totilas made their show come back almost one year after their last competition at the 2014 CDIO Aachen in July. The duo rode as guinea pigs at a Dutch national show in Hulten, The Netherlands. Their score was not published.

Rath and Totilas were entered "hors concours" which means not as an official combination. The pair was able to ride with their radio on so that coach Sjef Janssen could continue monitoring and instructing his student during the test. The ride was scored by the judges' panel but the result was not published.

Rath is entered to compete at the 2015 CDIO Hagen on 8 - 12 July 2015 which will be the final German team selection trial for the 2015 European Championships.

Since late 2011 Totilas has been plagued by injuries. After a two year recovery period Rath and Totilas made a come back in May 2014 and booked several victories in Kapellen, Wiesbaden and Aachen. At the 2014 CDIO Aachen Totilas was withdrawn from the freestyle and dropped out of German team selection for the 2014 World Equestrian Games as the stallion had re-injured himself. Several equestrian media sources stated that Totilas was operated on. The competition in Hulten on 28 June 2015 was their first public come back.

See the video of the ride here.

Related Links
Totilas' 2015 Show Come Back Planned for May
Totilas Receives Bye in 2015 German Dressage Championships in Balve
Will Totilas and Bella Rose Be Ready for Balve?
Totilas Buzz at the 2014 CDI Kapellen