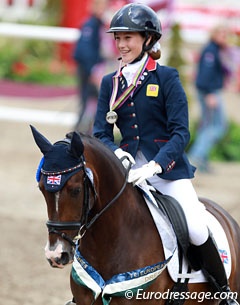 The British Dressage Pony Selectors have unveiled their team of four for this year’s European Pony Championships in Malmo, Sweden on 5 – 9 August 2015.

There will be a pre-Europeans training camp at Kilbees Farm in Berkshire 29 – 30 July before the squad make the journey to Sweden. The selectors, riders, team staff and all at British Dressage are extremely grateful to Tony and Sarah Pidgley for their kind hospitality once again.

The British Chef d’Equipe will be Liz Mills and the team trainer is Peter Storr.