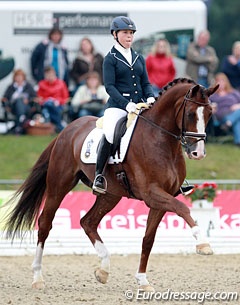 The 5-year old Rio da Carma and the 6-year old Quarton produced the stand out performance at the first Swedish selection trial for nomination for the 2015 World Young Horse Championships in Verden, Germany, in August. The turn-out at the first trial out of two was restricted to just nine combinations making an appearance in Flyinge on 20 May 2015.

Dressage judges Annette Fransen-Iacobaeus and Lars Andersson assessed the horses in Flyinge and scored them in their performance of a young horse test. The Swedish selectors who will make the final call on which horses get to go are Bo Jenå and Susanne Rudholm.

Four 5-year olds came to Flyinge and Maj-Christine Ehnberg topped the leader board on the chestnut Swedish warmblood Rio da Carma (by Skovens Rafael x Jaguar). The pair scored 74.00 points and edged out Sandra Sterntorp on the Swedish bred Obelix O (by Obelisk x Caprimond), who finished second with 72.800. Yvonne Osterholm and the Swedish bred Fiera Girl (by Faustinus x Rubinrot) scored 71.200 and they were followed by Mia Runesson on the Swedish mare Odd Molly (by Zuidenwind x Guinness) with 69.800.

Five 6-year olds were presented to the panel of judges and the selectors and last year's Swedish representative in Verden, Yvonne Osterholm and Quarton (by Quaterback x Don Schufro) aced the class with an 82.200 score. Grand Prix rider Anna Svanberg steererd Missippi (by Highcruiser x Maraton) to a second place with 77.600, followed by Mia Runesson on Fling For U (by Don Romantic x OO Seven) with 73.800. Two gentlemen closed the ranks with Olof Axelsson on Mythos CML (by Florencio x Bolero) slotting in fourth with 69.800 and Hannes Melin on Kiamo (by Kennedy x Andiamo) completing the top five with 65.900.

Next selection trial will be in Stromsholm in June.