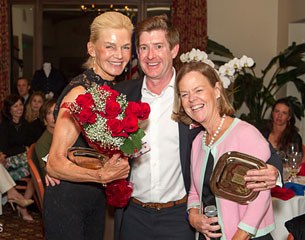 The live auction included such fabulous items as a weekend in Aspen and Napa Valley to training with Olympians Steffen Peters, Jan Ebling and Charlotte Bredhal. The auction raised over $54,000 for the High Performance Dressage Programs. With the 2016 Rio Olympics just over a year away, coaches and athletes have already begun preparing, with the aim of making the United States one of the strongest contenders.

Traurig, the U.S. Dressage Young Horse Coach, commented, “I thought it was a big success. The participation was more than we expected. It’s very encouraging. I really believe that we did a good job and I am really happy with the event. It all came together beautifully.”

USET Foundation Executive Director Bonnie B. Jenkins also talked about “The Dressage Challenge,” established by Claudine and Fritz Kundrun. Launched at the end of the March, this exciting new fundraising effort was created specifically for U.S. High Performance Dressage Programs. The Kundruns will match $1 for every $2 in gift commitments made by Dec. 31, 2015, up to a total of $500,000.

The goal of The Dressage Challenge is to raise $1,500,000 to provide increased funding for training and competition opportunities that will put the United States consistently on the podium at international championships from Junior/Young Riders to the Olympic Games. Commitments of $25,000 or more made by Dec. 31 are eligible for The Challenge and may be paid over a multi-year period. Gifts are all tax-deductible. To date $850,000 has been raised toward the goal.

“Christine and Sean did an incredible job organizing the benefit, It was really exciting to see the support from the west coast dressage community including riders and owners in their enthusiasm and commitment to taking the United States Dressage programs to the next level,” said Jenkins.