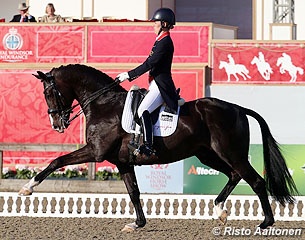 The show career of Carl Hester's number one British team horse Uthopia has been put on hold indefinitely. The 14-year old KWPN stallion  has not been competed since May 2014.

Carl Hester is frequently questioned about the reason for Uthopia staying home and he has been quite tight lipped about it. One week ago he posted a statement on Facebook explaining Uthopia's absence by referring to the stallion's breeding duties.

"He's in very good form and this year we will be concentrating on his breeding and he will be standing at Meadow Stud in Birdswood, Gloucestershire. Although he has had limited mares in the past, he has bred some fantastic young stock which we are all excited about seeing in the competition arena soon," said Hester.

To Eurodressage Hester confided that there is still an on-going legal procedure concerning the ownership of the stallion.

In 2012 Uthopia was owned on paper by Irish Sasha Stewart with Carl having a 50% share, but disputes with the bank revealed that the black stallion sold to an anonymous investor a few years ago. Stewart dealt with a bankruptcy in 2010 and creditors are still pursuing the matter legally which already led to an injunction on Uthopia two years ago.

"It is not yet settled," Carl told Eurodressage, "so he's earning his keep with stud duties now."

Charlotte Dujardin began competing Uthopia in 2013 and did so at the CDi's in Addington, Saumur, Rotterdam and Hartpury.  Carl rode him again the 2013 CDIO Hickstead to qualify him on the British team for the 2013 European Championships in Herning. Dujardin stepped back on board in 2014 for the CDI's in Addington and Saumur. Their last show, as well as Uthopia's, was the CDI Windsor in May 2014.