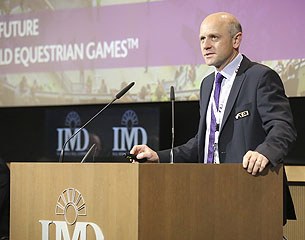 “We are all here because we care about our sport,” De Vos said in his opening address. “We need to be open and honest about the challenges we are facing as a sport but more than that we need to be proactive and brave enough to consider changes that will address these challenges. I remember a quote from IOC President Thomas Bach who said “change or be changed.

“So it is absolutely not about change for the sake of change and by no means is there any desire to lose or replace the values and traditions of our sport. But we need to be open-minded to look at changes that can improve our sport and its legacy for the generations to come. What should be changed and how is why we are here today and I am grateful to each and everyone one of you for taking the time to participate in this Sports Forum,” he said.

Professor James Henderson, Dean of Programmes and Innovation at IMD welcomed participants to the renowned school. “It is a great honour to host you at the wonderful institution that is the IMD,” he said. He outlined the school’s mission of educating the world’s leaders to lead transformation journeys in times of turbulence and support others to embrace change in a spirit of dialogue, openness and transparency. Professor Henderson emphasised the importance of innovation and change and wished the delegates open, inspired and pioneering discussion.

The Forum’s first session was dedicated to the World Equestrian Games, with the objective of turning the microscope on the FEI’s flagship event and outlining potential changes to the FEI disciplines and competition formats in order to increase the interest of future bid cities, the public, media and broadcasters.

Tim Hadaway, FEI Director of Games and Championships, highlighted the magnitude of the Alltech FEI World Equestrian Games™ 2014 in Normandy which were the biggest in the event’s 25-year history, with 74 nations represented, a record 28% increase on previous editions. Over 25,000 individuals including 900-plus athletes, 3,000 volunteers, 1,750 media and 250 officials were accredited and more than 1,000 horses competed at five venues spread across the Normandy region of France.

Highlighting the economic impact on the region, Hadaway detailed that 46,300 hotel nights had been booked through the Organising Committee and 103,500 meals were served to the accredited population. The event had also enjoyed record ticket sales with almost 575,000 tickets sold.

The event had also achieved substantial media coverage with more than 24,000 media mentions in France, 3,173 hours of global broadcast coverage, a total television audience of 330 million, and 5.5 million views on the FEI YouTube channel reached during the Games. The Games were also hugely successful on social media.

The total budget for the Games was €79.6 million, with an economic impact in Normandy estimated at €190 million and €368 million for France. The Organising Committee is expected to announce what Hadaway termed “a significant surplus” shortly.

Despite these positive developments, which had made the Games successful overall, the FEI acknowledged that some aspects of the event did not go well.

A thorough debriefing process involving numerous stakeholders had identified that holding the Games over multiple venues had resulted in complex logistics and had led to increased cost. Other problems included delays in publication of key information and issues with IT systems, transport, security, and delays in issuing of ministry paperwork on departure of horses. Insufficient amenities and services, along with cross country day traffic problems, had resulted in a level of frustration for some spectators.

The FEI has acknowledged that the World Equestrian Games had evolved into a huge logistical and financial challenge and that, despite the many positives, the excellent sport and enjoyable atmosphere, the multiple venues had amplified complexity and stretched financial and human resources, occasionally resulting in the loss of the original concept of uniting the equestrian family.

The thorough debriefing conducted after the Games has resulted in many detailed operational recommendations, knowledge transfer programmes and increased levels of liaison between the Organising Committee and the FEI throughout the planning stages of the event. A greater definition of requirements and technical specifications is underway in order to achieve a successful and sustainable event which is attractive for future bidders.

Matthew Wilson from The Sports Consultancy (TSC) presented the outcome of a detailed strategic review of the FEI World Equestrian Games™ put in place by the FEI prior to Normandy. The TSC had conducted a proactive review to understand how this flagship event could be re-aligned to meet its original objectives and to help equestrian sport continue to grow.

The outcome of this consultation process was clear: 97% of consultees were in agreement that the Games should remain as the pinnacle of the equestrian calendar, and 83% of consultees wanted to maintain all eight disciplines at the Games. It had become clear however that there was a strong appetite for change. The FEI’s main challenge was to ensure that the event could be delivered sustainably and continue to thrive.

A key finding of the TSC study was that the budget of the 2014 edition was considered by many as exceptionally large, and required extensive investment from the public sector. Only very few nations could afford to host such an expensive and complex event.

The following key conclusions from the TSC study were highlighted:

Wilson concluded by outlining the clear strategic objectives the FEI should use as guidance through the proposed changes. The Games must remain differentiated from other FEI events and remain a pinnacle of the equestrian calendar; it must help grow the sport and assist with delivering the global appeal required for Olympic status; the budget for hosting the Games needs to be as attractive as possible to hosts and carry a lower financial and delivery risk; the public sector investment must be achievable for a greater number of prospective hosts through delivery of a significantly improved return on investment; the Games must be commercially effective for the FEI; and the Games must be accessible for and attractive to spectators both on venue and via broadcast to increase the stakeholder experience.

Stefan Kürten from the European Broadcasting Union (EBU), a professional association working on behalf of European public service broadcasters, addressed the Forum. The FEI and EBU have been partners since 1989 and the cooperation was recently extended through to 2022.

Kürten spoke about the challenges currently faced by sports in public broadcasting, including fierce competition between sports events, less airtime for sport on generalist channels, strong fragmentation of the TV market, increasing calendar conflicts, and the duration of sport events versus entertainment programmes. Sport was expensive compared to other programmes but remained strong when there was emotion, national interest and when it was broadcast live. The number of thematic channels was exploding, resulting in less sport on generalist channels, but ratings are always king, Kürten said.

The key to increased airtime on public television, which was an essential component of a successful sponsor package, was a high quality television production, telling stories, meeting the broadcasters’ needs, and a requirement for strict timetable discipline and focus.

In the following question and answer session between the panel and delegates, there was input from the Danish, New Zealand, United States, Australian, Austrian, British, and French Equestrian Federations and the riders’ representatives, with discussion on ticket sales, opening and closing ceremonies, compulsory qualifying elements, live television coverage and the optimum number of athletes and the optimal duration for the event.

FEI Director of Games and Championships Tim Hadaway concluded the session by explaining that the fruitful discussion had set the scene for the remainder of the Forum. All the proposal made at the Forum would be looked at closely, further consultation work would be conducted and the finalised proposals would be submitted to the vote of the General Assembly in November.