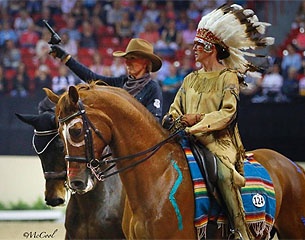 Dressage was the main attraction at the Thomas & Mack Center on Friday afternoon 17 April 2015, but this time the performers were judged on their entertainment value as well as their riding skills during the Dressage Showcase at the 2015 World Cup Finals in Las Vegas. The star-studded showcase was complete with music, costumes, laser light shows, pyrotechnics and performances that can only be found in the "Entertainment Capital of the World."

The 2015 World Cup Finals have returned to the United States for the first time since 2009, and provides a unique opportunity to witness the world's best horses and riders in both show jumping and dressage competing under one roof at the Thomas & Mack Center in Las Vegas.

The afternoon's events were kicked off by "ShowStoppers", who performed the National Anthem, followed by the opening performance by Le Reve, voted "Best Production Show in Las Vegas" for an unprecedented four years running. Both productions are features at the Wynn Las Vegas. 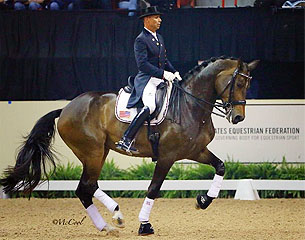 The Rising Star competition featured horses that are on their way up the 'competition ladder' in the sport of dressage. First into the arena was U.S. rider Sabine Schut-Kery and Sanceo, a 9 year-old stallion that Sabine has been riding since he was 3 years-old. The pair have won six competitions this year already at Prix St. George and Intermediaire level, and look to be a promising duo for the future. They also proved popular with the crowd who cheered every time the expressive bay gelding did an extended trot across the arena.

Steffen Peters, the 2009 World Cup Champion who won the title the last time the Final was held in Las Vegas, performed the Grand Prix Freestyle to Music aboard the 8 year-old bay mare Rosamunde. The pair have had much success at the Grand Prix level this year, with wins in both Wellington, Florida, and San Juan Capistrano, California. Steffen placed third in Thursday's World Cup™ Grand Prix competition aboard Legolas, and the crowds cheered for their favorite U.S. rider as soon as he rode into the arena. 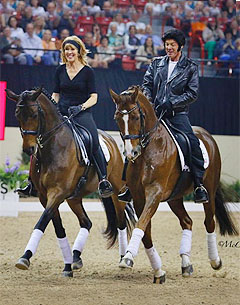 The Pas de Deux was full of fun and excitement as the dressage riders and horses performed in pairs to music while dressed in costumes. David Blake and Shannon Peters brought the vibe of Gotham City to the main arena dressed as Batman & Poison Ivy while riding Ikaros and Weltino's Magic respectively. Next in the line-up was Mette Rosencrantz on Marron and Anna Dahlberg on Rico with their Wild Wild West performance dressed as a cowboy and Indian, complete with five-gallon hat and headdress. The final combination was Charlotte Bredahl-Baker, dressed as Olivia Newton-John, rode Chanel and performed alongside Jan Ebeling dressed as John Travolta who rode Darling. They performed to the well-known songs from the movie Grease. The spectators clapped along as the horses danced in sync across the arena. The duo earned the loudest cheers from the crowd, as well as the most points from judges Linda Zang, Stephen Clarke, and Hans-Christian Matthiesen, which gave them the victory. 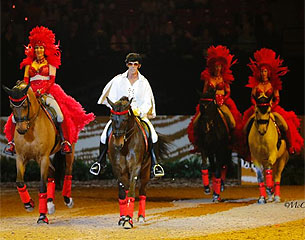 "It's also really important to get the judges dancing during the performance," said Linda with a laugh. "And since this is my era, I gave it a 10!"

The four horse-and-rider Quadrille performance was the perfect ending to the afternoon as the glam of Las Vegas returned to the main arena. Geunter Seidel dressed spectacularly as Elvis while riding Zamorin, while his 'Las Vegas Showgirls' dressed in sparking red outfits included Michelle Reilly on Umeeko, Sarah Christy on Xirope and Elizabeth Ball on Orion.