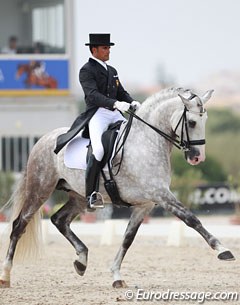 “Dragao has a very funny character because he loves to play with things in his mouth, and while he is a little bit stallion in his behaviour he is never dangerous,” Jose told Eurodressage. “He is all talk, but never really does anything.”

Bred and owned by Herdade das Figueiras, Dragao has been with Jose for over two years. Their plan is to make the small tour in 2015 and continue experimenting with the Grand Prix movements at home.

“He is already playing with the piaffe and passage exercises and has shown he has a good talent for these more difficult movements," the Jerez de la Frontera based Jose explained.  “Rafael Soto and Jan Bemelmans come to my stables sometimes to train us. I hope also to receive the help of Isabell Werth, to give me the technical advice I need to improve every day!”

Jose will spend the rest of April at home, and then head to the CDI Madrid in May. “Not too many competitions, no pressure," he stated. 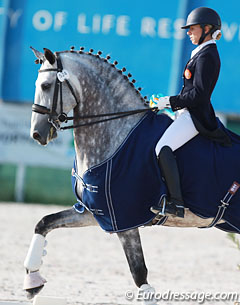 Medium tour winner Maria Caetano and the 8-year old Coroado impressed with their talent, even though the grey still needs to develop more strength to collect and step under in the passage. Caetano was delighted with her win and feesl this is the beginning of bigger things to come.

“Coroado has been with me since he was five and we competed together at the World Young Horse Championships in Verden," said Maria.

Owned by Yeguada Finca Tineo, Coroado won the Portuguese Championships at Small Tour level in 2014. Maria hopes that this year they can continue their success tour this season after victories in the medium tour at the CDI Jerez de la Frontera and in Vilamoura.

“I truly believe in this horse for the future, and I’m planing to debut him in Grand Prix at the end of this year,” Maria stated.

Eurodressage's Astrid Appels took photos of all riders competing in the CDI Vilamoura. If you are interested in photos, contact us by email with your name and the name of the horse.

Related Link
Eurodressage "On the Scene" at the 2015 CDI Vilamoura