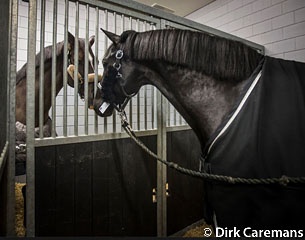 The stage is set and it’s all-systems-go at the Thomas & Mack Arena in Las Vegas, USA where the 2015 World Cup Dressage Finals get underway on Thursday.   All horses passed their veterinary inspection, and even that provided entertainment with some over-exuberant equines giving their handlers a hard time.

Age is no barrier to naughty behaviour as Morgan Barbançon’s 18-year-old stallion, Painted Black, demonstrated when breaking free and going for a quick gallop around the ring before regaining his decorum.

There is huge anticipation of a great week ahead, and tomorrow is dedicated to warm-up classes before the excitement goes into over-drive with a rapid-fire opening day on Thursday when the  World Cup Dressage Grand Prix gets the action underway at 12 noon.

Early on Friday morning the Dressage riders and horses have the opportunity to rehearse their Freestyle. Saturday brings the much-anticipated Freestyle, which will bring the World Cup Final to a close, starting at 12 noon. “The temperature has definitely hit him, he doesn’t have long to acclimatise before he starts to compete but it’s great to be here and taking part in this show in the middle of the desert! He’s flown well and the last two days we gave him some easy time, not too much work. He’s gone from winter at home to this incredible heat, and I’m hoping he’s not suffering from jet-lag!” she said. It has been windy and sunny today in the entertainment capital of the world, with the barometer showing a temperature of 85 degrees at 15.30 local time.

The Thomas & Mack Arena presents many challenges for equestrian competitions due to its unusual shape and size. It regularly hosts concerts and sporting fixtures, including boxing, football and basketball tournaments. “It’s a bit like a huge lunge-pen!” Dujardin said today, “I’m told it’s bigger than Olympia (London) but it doesn’t feel like it, maybe it’s because the seats rise so high around the ring. How are they going to fit seven judges in there?” she asked with a laugh. “It will be my first time to start my test inside the arena so that should be interesting too!” she added.

by Louise Parkes for the FEI - Photos © Dirk Caremans