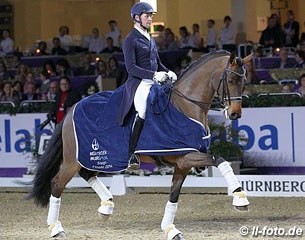 The Nurnberger Burgpokal is a highly popular show circuit in Germany for young Prix St Georges horses. The finals are held annually during the Frankfurt international indoor competition right before the Christmas holidays. The finals include a warm up class and then a finals' test in which the top scoring horses claims the trophy and title.

Four judges of a panel of five ranked Rath and his 8-year old Samba King (by Sandro King x Lancet) first with an overall score of 74.561%. Samba King was acquired by Eisenmann's Mallorca based dressage centre Es Fangar in November 2012 but due to Franziska's pregnancy and giving birth to the couple's first child, Matthias has been riding the 2012 Danish Young Horse Champion.

Breeding stallion Danone I (by De Niro x Weltmeyer x Bolero) did good business in the Burgpokal finals with no less than 3 offspring out of 14 competing sired by him: Danönchen, Desperados and Dante Weltino