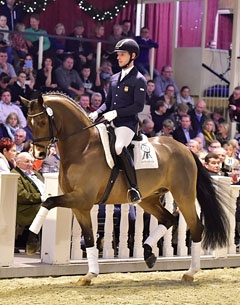 A new auction record price was set at the 2014 PSI Auction in Ankum, Germany, on Sunday 7 December 2014. The 6-year old Australian bred Hanoverian SPH Dante became the best selling warmblood ever at an auction. The 7-year old sold for 2,800,000 euro to the Russian duo Elena and Sergej Knyaginichev.

SPH Dante (by Welfenadel x Dormello) was the most expensive auction horse in the 35-year history of Performance Sales International, breaking the record of 2003 for Poetin, who sold for 2.5 million euro.

“Dante already shows such an amazing talent for piaffe and passage at the age of six many other horses will never achieve at all during their whole life,” described Ullrich Kasselmann the specialty of the top-priced dressage horse this year. 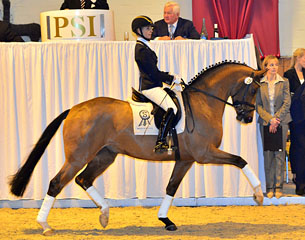 The 8-year-old mare Toulonia (by Toulon x Balou du Rouet) was the best selling show jumper, selling for 1.1 million euro to the United States. “Once again we have seen that there is an extraordinary market for extraordinary horses. Customers fought for their horses which underlines the outstanding overall quality,” Paul Schockemöhle gladly summarized.

The second best selling dressage horse was the 3-year-old gelding Quel Filou (by Quaterback x Stedinger), winner of the bronze medal at the 2014 Bundeschampionate. He sold for 1 million euro to Patrice Mourruau from Luxembourg.

A new price record of 2.8 million euro and a record-high overall revenue of 16.43 million euro confirm the success of the P.S.I. Auction. The horses were sold at averagely 322.412 Euro with a total amount of 8.68 million Euro paid for the dressage horses and 7.76 million Euro for the jumpers by customers from all over the world. Within 35 years, the P.S.I. Auction has been developing into a global player, awakening desire all over the world.

For more information about the collection, the auction, POCs and service, please click on www.psi-auktion.de.