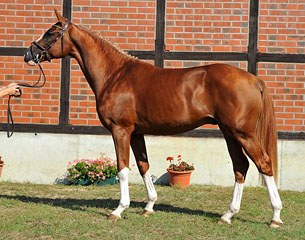 Seventeen stallions were approved for breeding at the 2014 South German stallion licensing, held for the fifth time in Neustadt/Dosse on 14 - 16 November 2014. Six stallions became premium of which only two were dressage bred.

A total of seven dressage stallions in a majority of show jumpers were approved at this licensing. Two colts were named premium, both are bred from the Q-line, Quaterback and Quadroneur. Joachim Kamieth bred the Quaterback x Dressage Royal colt, Gestut Kafernburg bred the Quadroneur x Placido, which sold at auction for 39,000 euro to Gut Wintermuhle.

Five licensed stallions were auctioned and they sold for an average price of 43,000 euro.