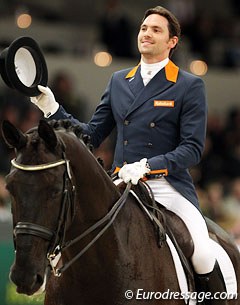 When asked for the reason of his departure Tommie told Eurodressage that "the owner and I have a totally different vision when it comes to management."

On Sunday 12 October 2014, former Dutch young rider team member Michelle van Lanen announced that she has also left Platinum Stables. It regrets me to say that I had to say goodbye to Five Star (the horse she rode at Platinum). I will certainly miss him," Van Lanen wrote on her Facebook page. "Sometimes things just go differently than you had hoped for or expected. I'm looking forward to a new challenge with a future." Little over a month ago Platinum stabled attracted international Grand Prix rider Markus Gribbe to riders' team at the yard right after Tommie Visser and Robin Beekink had left. Platinum stable is managed by Erwin Samuels of IPS Horse Group, whereas the facility is owned by Singapore based Shirley Wilaras.

Diederik van Silfhout has received the ride on the 2013 KWPN Stallion Performance Test winner Fairytale (by Lord Leatherdale x Negro) . The black stallion is owned by Gert Jan van Olst and was ridden by Luke Baber-Davies, who has given up his job at Van Olst and is returning to the U.K. Van Silfhout will be competing Fairytale in the 2014-2015 KWPN Stallion Competition

Former British junior rider team member Claire Gallimore seems to be preparing for her international show come back as a young rider. After the 2012 European Junior Riders Championships Gallimore has no longer been out to a CDI event while training at Bartels Academy in The Netherlands. With the 7-year old stallion CJ she has made her young riders debut at a regional show in Holland, scoring 65.33%, and is planning on competing in CDI's as of 2015. 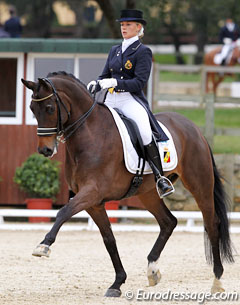 The 13-year old Dutch warmblood gelding Ucelli T (by Olivi  x Gribaldi x Raimond) has been euthanized after an unsuccessful three-year attempt to recover from injury. Bred by H.J. Tüss, Ucelli T made his claim to fame as a young horse when he was owned by Tüss and Hans Vrijvogel and ridden by Hans Peter Minderhoud. The charming bay gelding won the 2006 Pavo Cup Finals, earned silver at the 2007 World Young Horse Championships in Verden and became the Dutch Small Tour Champion in 2009. In May 2010 he sold to Belgium to become the  young riders' horse for Belgian Junior team rider Noemie Goris. The combination successfully showed at the 2011 Sunshine Tour in Spain but the horse injured himself there. Although he came back to full fitness from that injury, he sustained a new one from which he never recovered despite three years years of highly professional care in a rehabilitation centre in Belgium. Ucelli T was euthanized on Tuesday 21 October 2014.

German Under 25 grand Prix rider Sarah Runge has acquired the 12-year old Dutch warmblood gelding Versace (by Flemmingh x Goodtimes) last summer. They gelding was briefly named Valentino and bought by Gaston Glock in 2012 as a rising Grand Prix horse for Hans Peter Minderhoud. The Dutch team rider never competed the horse internationally and Versace/Valentino was shipped back to Denmark to Andreas Helgstrand to be sold again. Runge discovered the gelding there through Sven Rothenberger, the father of her boyfriend Sönke, when he found junior rider's horse Geisha there for daughter Semmieke. "He's a good horse to ease the step into the U25 and Grand Prix," Runge told Eurodressage about Versace. Her plans are to compete him at U25 next year.

Zuchterforum reported that the 23-year old Bavarian bred Oldenburg licensed stallion Lafitte has died unexpectedly. The dark bay sire, bred and owned by Monika Levay and also known as Luky Skywalker, collapsed in his box after returning from the paddock. Lafitte (by Landsberg x Inschallah AA x Praefectus xx (Bonfire's dam line)) was licensed in 1995 and stood first at stud at stallion station Klatte, followed by the state stud Neustadt/Dosse. He finished third in the 100-day Stallion Performance Test and was trained in show jumping up to S-level. Lafitte sired four licensed sons, including the 2003 Brandenburg licensing champion Lalique (sold to the USA). He mainly sired jumper offspring.