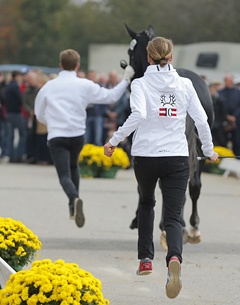 At exactly 1:30 in the afternoon on Thursday 16 October 2014 Petra Wilm, the President of the Trakehner Association, opened the 52nd Trakehner Stallion Market at the Holstenhalle in Neumunster, Germany.

And then hooves started to tap across the pavement: a total of 35 Trakehner stallions were presented to the five Approval Committee members for the first part of the licensing, the presentation on hard surface. Included were four 3-year old stallions who will be participating in the first ever Under Saddle Approval in the history of the Trakehner Association.

The large crowd of visitors from all over Europe and overseas followed the performances with interest. Languages are a must at the Trakehner Stallion Market since there are guests from 13 of the international daughter Associations as well as equine experts and those interested in the auctions from all over the world. All met up for the beginning of the Trakehner Stallion licensing and the presentation of the auction collection which ended the first day.

Many stallions were watched with great interest. For example, the first American Trakehner approval candidate Davidas (by Horalas, who was born in Illinois (USA) and is a grandson of the world class stallion Abdullah. Dr. Margaret McGregor is the breeder. Boulevard and Ghandi, both by Easy Game, are two Dutch bred Trakehner stallions that have also been allowed to take part in the 52nd Trakehner Stallion Market.