Now and Forever Feivel For First at the 2014 CDI Vienna 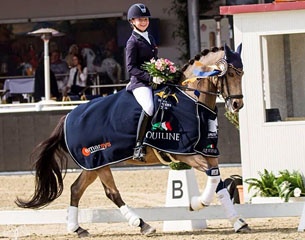 Met with some blue skies and sunny surrounds the perfect setting was set for German youngster Kim Burschik and her 13-year old Westfalian pony Now and Forever Feivel (by Now or Never de Montmain x Millant x Nadol) to make a clean sweep of the Pony tour, knocking out home country rival Nicola Louise Ahorner and her 10-year old palomino mare Dynasty (by Deinhard B).

Burschik won the team test with 72.462% and went on to take the Individual with 72.732 % and the kur test with a tidy 74.525 %. She was very happy about her results, particularly as she felt they were very well prepared and really tried to do their best!

“Feivel was absolutely great," the 15-year old Kim told Eurodressage. "He was relaxed but also concentrated on me and I think he liked the atmosphere of the stadium."

The Burschik family discovered the buckskin at Sven Rothenberger's yard in February 2014 and Kim has certainly bonded with him very quickly. She really enjoys riding a pony with such a great attitude for work.

“Feivel has an awesome personality and he does anything for his rider. He is always friendly and enjoys attention.”

Trained by Juliane Dahlmann-Weber in Fröndenberg, Germany, Kim also has some exciting young horses in work and hopes to get to one or two more shows this year. Then she'll start preparing for the next season.

“I am still in school and I think once I would like to study and then decide what do do in the future, whether to become a professional rider, or discover another profession," she stated.