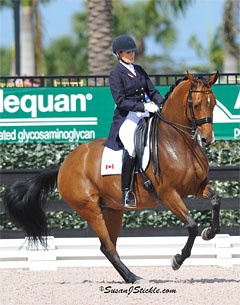 Holzer was also second in the Grand Prix test with her 9-year-old Westphalian gelding Dressed in Black (by Dresemann x Silvano) scoring 68.800%. The pair also won the Grand Prix Freestyle with 73.850%.

In the CDI3* Prix St Georges test, Denielle Gallagher-LeGriffon, originally of Lakeside, NB and currently residing in Suffern, NY, was victorious, with 68.158%, riding Argo-Conti Tyme (by Argentinus x Continue), Strasser’s 12-year-old Oldenburg gelding. Gallagher-LeGriffon and Argo-Conti Tyme also won the CDI3* Intermediate I (70.351%) and were second in the CDI3* Intermediate I Freestyle with 72.542%.

“I feel like we have begun a journey and he has stepped up to every challenge. Argo Conti Tyme has continued to impress me each time out. It seems he just keeps getting better and better,” said Gallagher-LeGriffon. “Evi Strasser came to me when she knew I was looking for a horse and said she had one for me to try. I knew from the first ride that we would be a good match. Together, Argo Conti Tyme and I have become a team with the help of my coach Ashley Holzer and all of my amazing sponsors and supporters.”

Placing second (67.500%) in the CDI3* Prix St Georges test was Maya Markowski of St Clements, ON, and her 11-year old Canadian Warmblood mare Lumiere, sired by Lynx. Elizabeth Steacie of Brockville, ON, was fourth with 66.228% riding Callahan (Cordoba x Macho AA), a nine-year-old Hanoverian gelding she co-owns with Deborah Dudgeon.

Strasser and Rigaudon Tyme (by Rosario x Calypso II), 10-year-old Oldenburg gelding, were third in the CDI3* Intermediate I with 68.026%, while Markowski and Lumiere placed fourth with 67.982%. Simone Williams of Navan, ON was fifth (67.237%) riding Farley (Fasterbo x Rubirando), a 10-year-old Hanoverian gelding she co-owns with her parents, Margaret and Bob Williams. Steacie and Callahan rounded out the Canadians in seventh place with a score of 66.140%.

Winning the Intermediate I Freestyle was Markowski with Lumiere, scoring 72.583%. Fourth place went to Strasser and Rigaudon Tyme (69.125%), and Williams and Farley were fifth overall with 68.500%.

In the CDI1* division, Rebecca Cowden, who is based in Califon, NJ, rode Arami (by Akinos x Fanal Prydsholm), Pam Wildman’s 11-year-old Danish Warmblood gelding, to second place in the Prix St Georges test with a score of 68.070%. Olivia Wentworth-Stanley of Meaford, ON and Zeldzaam (by Stedinger x Ferro), a 10-year-old Dutch Warmblood gelding owned by AO Acres, finished in third place in the Intermediate I test with a score of 66.316%, while Williams riding Linden Ein (Lux x Wendekreis), a 10-year-old Hanoverian gelding she co-owns with Margaret Williams, was fourth in the Intermediate I Freestyle (69.167%).