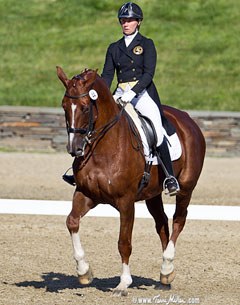 Thrilled with her performance at the 2013 CDI-W Saugerties last weekend, Argentinian Micaela Mabragana twice scored strongly in the mid sixty percentage range and ranked fourth in the Special. With her sights set on the 2014 World Equestrian Games, Mabragana has proven the Minimum Eligibility Standard is easily achievable for the Latin-American rider.

Aboard the experienced 17-year old Swedish warmblood Granada (by Granit x Warrigal x Dorn), Mabragana placed 9th in the Grand Prix with 66.106% and lifted on day two to a score of 67.479% in the Grand Prix Special for 4th place.

"Our performance last weekend was great and although we had good rides on both days, on the Sunday Granada felt happier in the ring and fresher in his work and we had no mistakes," the 27-year old Micaela told Eurodressage. "It was my birthday, so I think that was his gift to me."

Granada is owned by Sam Grunkorn and was purchased in 2007. The chestnut was Micaela's Young Rider horse which, over the years, she brought up to Grand Prix. "In 2010 he went to another rider for a few months and represented Israel in the WEG 2010.  After that Granada came back to me, but unfortunately he had to be out of work for two years due to an injury," Mabragana explained. " It is amazing that at this age he is still doing well and he surprises me every day. He is happy and healthy and continues to teach me and open doors for me." A working student for Lendon Gray for five years, Micaela has spent the last three years developing her own business in Bedford Corners, NY and Wellington FL. "In New York I rent a beautiful ten stall barn, which is very peaceful and has a great riding field, hills, and open spaces for hacking.  To me that is really important, in order to keep my horses happy and willing," she said.

Representing Argentina at the 2007 Young Rider World Cup Final in Frankfurt, Germany,  Micaela had the opportunity to show at Grand Prix level not only on Granada but also on Grunkorn's Nexus. "I am living the dream now, a long way from when I came to the States in 2000 for the first time to compete in Lendon Gray's Youth Dressage Festival.  That is where I met Lendon and after I finished high school I came back to be a working student and learn as much as I could," she explained.

The journey has not been without its ups and downs, but overall Micaela has enjoyed so many amazing experiences in the US and also met wonderful dressage professionals and horses. "There are just so many amazing horses to train and show," she said. "I have been able to ride with top trainers such us Lendon Gray, Courtney King, Scott Hassler, Henk Van Bergen, Lilo Fore, and Steffen Peters among others." 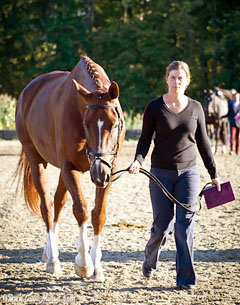 Mabragana is aiming to compete at the 2014 World Equestrian Games but all will depend on the health and fitness of her seasoned partner. So far Mica has shown Granada in two CDI's, which have already given her the qualifying scores to represent Argentina at WEG.

"It is a long way away and with horses you never know what will happen, but right now my goal is to keep Granada happy and healthy and to never take him for granted," she stated. "Every good ride is a gift.  He is so much fun, he is just a cool guy.  I know him so well now, that I know when to just go for a hack or a gallop or when to push a bit more.  He is my partner, and I have a lot of respect for him. I would never push him, he doesn't have to prove himself.  It would be a dream come true to go to France but it is him who will determine that."