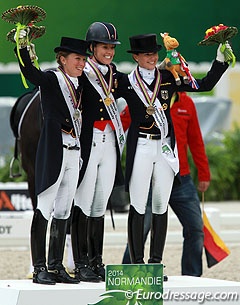 British Olympic and European Champion Charlotte Dujardin continued her streak of success at the 2014 World Equestrian Games in Caen, France winning in the Grand Prix Special test gold medal after scoring 86.120%. Her test was not entirely fault-free but it was simply beautiful. Helen Langehanenberg finished with silver and Kristina Sprehe became the surprise winner edging out Adelinde Cornelissen for a podium place.

The Grand Prix Special was a very exciting class today with a high level of riding and good judging to boot. The ranking of the riders was easy to follow and the scores given were agreeable. The Dutch media, however, is crying insult and injury as their star Cornelissen did not finish on the podium. Maybe this is a result of the new dawn in dressage, started at Olympics in 2012, which now desires a dressage of lightness and harmony. At least that is the standard which prevailed today, even above technical perfection.

Dujardin and the 12-year old Valegro just looked magical in the Special. They had a perfect halt at entry, the half passes were superb, the trot extensions mind blowing and the passage was soft and light, even though the gelding could have tucked the hindlegs more under the body in general. The transition from passage to walk came a bit early but the walk part was good.

Unfortunately right before the transition from collected walk to piaffe, Valegro had to poo and the transition didn't happen as quickly. Afterwards the horse did show a wonderful piaffe with the sufficient amount of steps. The judges downscored the transition and piaffe but were very generous for the second piaffe score which was also good. The canter work was powerful and radiant. Unfortunately Dujardin did not space the two's well enough and the last change was questionable. The one tempi changes were flawless and the pirouettes delightful. At all times Valegro was consistent in the contact. Dujardin might not have ridden a world record but it was such a great test, treated to standing ovations from the crowds.

"I knew it was going to be quite tough," Dujardin said about competing in the Special today. "The Grand Prix gave me loads of confidence. I decided to put my foot down in the Ferrari and that's what it felt like. With two's I just got too close to the board." When asked if the constant oohing and aahing of the crowd to each score disrupts her concentration, Charlotte admitted that, "the hardest thing was the crowd. They were reacting whether it was good or bad. I wanted to turn round and shout "shut up, I'm trying to concentrate." The crowd is tough to deal with." 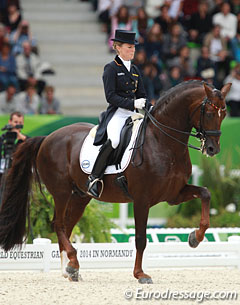 Helen Langehanenberg and the 14-year old Damon Hill finished second. The German duo showed top trot extensions, gorgeous elastic passage work and smooth transitions. He slightly stalled in the transition from passage to walk, but the extended walk was world class. There is no horse on the scene beating his walk at the moment, always pure in rhythm and relaxed. Damon Hill slightly ran out of steam in the first piaffe but it remained scopey. The second piaffe was nice as well, even though the right hind leg worked a little less than the left one. All flying changes were well executed, the pirouettes were small and this time Helen kept her horse sharp on the aids on the final centerline. Damon Hill does open his mouth often throughout the test, but the difference with some other horses is that it does not come from bit pressure  due to a heavy, pulling hand. Langehanenberg has the lightest contact with the bridle and there is not a single jerk in the mouth in the entire test. Harmony prevails despite the open mouth and that sets them apart from some other riders who control their horse with hand instead of seat.

Helen scored 84.468% and got 82.157% as low score (McMullen) and 86.373 (Judet) as high score. The unperturbed Helen is not distracted by the crowds' cheering and clapping. "Dami loves the audience. I like it when they are clapping. I'm not afraid to come  (in the ring) after Charlotte. I like this position. I had a very good feeling in the ring today. I do hear something (in the crowd) but honestly it doesn't really disturb me." 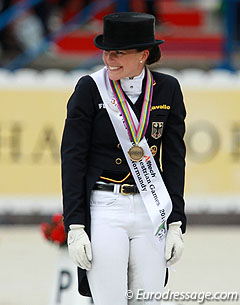 German Kristina Sprehe was the 26th started of the day and after posting a score of 79.762% she was not sure that it would suffice for a podium place. She had to sit in on four more top riders before the verdict fell. "My goal was to win gold with the team, but I never dared to think big. I just did my best. It's unbelievable. First gold and now bronze. I looked at Adelinde ('s ride) and I died."

Sprehe and her 13-year old Hanoverian stallion Desperados produced very active, energetic passage-extended trot combinations, showing true extensions with a lengthening of the frame and stride. Sprehe rode very meticulously with each movement beginning on the marker, something which top riders surprisingly forget or strategically avoid. There was a slight loss of rhythm in the collected walk but the first piaffe was top class. In the passage serpentine there were several jerky double beat steps behind but in general the stallion is no longer as  irregular as in the past. He took a big step into the second piaffe. Sprehe rode bravely through the canter work with a powerful, uphill extension. The pirouette left was excellent but the right one was slightly big. The single tempi's on the centerline were ground covering. The stallion was constant in the contact and there was no pulling involved to manage her strong mount today.  A minor buckle in the transition out of the piaffe at X tarnished the otherwise very good final centreline. Sprehe had 76.961 (Plewa) as low score and 81.471 (Fore) as high score. 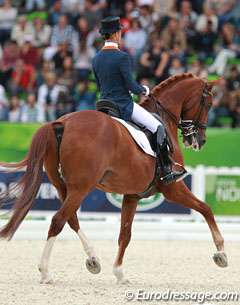 As last to go today Adelinde Cornelissen had the vantage point, but after making a booboo in the piaffe transition, the scores plummeted and her usually outstanding canter work could not pick it for an individual medal. The point difference was quite small though. Cornelissen and her 17-year old Parzival showed some crafty work, but there were a few issues as well. The trot work was very energetic with ground covering half passes but the horse was not always pure in the rhythm in the extensions and bopped the head a bit. The extended walk was well ridden, but Parzival built up tension in the collected walk and started to piaffe only a few meters into the collected walk section and far before the marker on the centerline. Instead of going back to walk, Cornelissen opted to ride the full piaffe exercise early which was heavily penalized by the judging corpse. The first piaffe was outstanding though, with good lowering of the haunches, but the passage that followed had the hindlegs way out and uneven on the serpentine. In canter the half pass to the right was much better than the one to the left. The horse got very tight in the neck in the two tempi changes. The one tempi's were superb and super straight, but in the extended canter the horse was very tight and had his mouth gaping due to a heavy contact. The pirouettes were nice, with more scope compared to the ones shown in the Grand Prix. The final extended trot was uneven again, but the centerline accurately ridden. Cornelissen scored 79.328% (Plewa) with 76.667 as low score and 83.235 (Fore) as high score.

Adelinde's score was also slightly affected by the fact that she entered the ring too late (not within the 45 second limit after the bell had been rung). The Dutch Equestrian Federation has filed a complaint with the FEI about this penalty. If the FEI decides to retract the score penalty it would not alter Cornelissen's score in such a way that she would get the bronze. 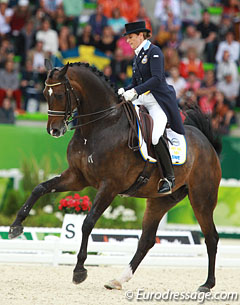 With Bella Rose dropping out, Tinne Vilhelmson knew she could have a shot at a medal if she gave it her all. The Swedish rider clearly rode with much more pezzazz and her Hanoverian gelding Don Auriello (by Don Davidoff x White Star) reciprocated well. He was more expressive and more engaged, but it did lead to a bit more tail swooshing. Tinne was talking business today and the passage and extended trots had more energy. The piaffe was really nicely on the spot with good sit. Only the passage on the serpentine had a bit of toe dragging going on. The tempi changes were really big and uphill despite the horse swinging in the hindquarters. The pirouettes were lovely. Don Auriello is at all times very nice, soft and up in the bridle which is a pleasure to watch. Vilhelmson scored 78.235% with marks ranging from 74.902 (Plewa) to 80.588% (Judet).

Austrian Victoria Max-Theurer and her massive stallion Augustin were also going for it but landed sixth place with 77.857%. Vici's horse is a big tank with a big engine behind. He puts it to use in the passage, which is springy and has good airtime, but should use it more in the trot extensions which remain slightly tame for such a powerful horse. Augustin got slightly tense in the collected walk and started the piaffe too early on the marker. The piaffe was nicely on the spit but could be a bit quicker in the rhythm. The tempi changes are a bit stocky and need more uphill tendency, even though there were no mistakes. Max-Theurer has her horse nicely in the bridle and Augustin foams throughout the test, accepting the bit and contact. 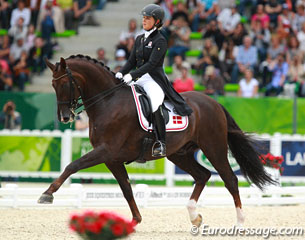 When Danish Anna Kasprzak went off course at the beginning of the canter work, spectators immediately feared  another "Herning Incident" would take place. Last year at the Europeans the top three riders all went off course in the Grand Prix Special. In Caen, Kasprzak was the only one, but it considerably affected her score. She finished seventh on 77.269%. The trot and passage work was active and forward. The half pass right was a bit uneven and in the extended walk he could have covered more ground. The first piaffe was quite insecure, the passage always super solid. The one tempi changes and pirouettes were a highlight.

American sensation Laura Graves and her Dutch bred Verdades (by Florett Ass out of a Harness mare) produced a stellar ride to placed them 8th with 77.157%. At the beginning of the test the passage could have been more collected and closed in the frame but the trot extensions were lovely. The piaffe was rhythmical, but Verdades gets wide in front and should lower the haunches more. Graves rides her horse in a very soft and supple manner and he always has the poll as the highest point. The canter pirouettes were delightful. America might have its own version of an "Adelinde" (a young rider coming out of nowhere to become the country's new number one) at hand beating Steffen Peters today for the first time.. and there is still much room for improvement.