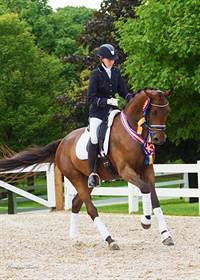 Endel Ots (Wellington, Fla.) and Everglades Dressage LLC's Donatus (Don Schufro x Zuchtbuch/Caramel) were the winners of Thursday's class and returned to the Championship Arena looking to earn the National Championship. The 10-year-old Wurttemberger gelding once again demonstrated his aptitude for the Grand Prix movements to finish second in the Championship Class on a score of 69.917% and an overall winning total of 69.406%.

"I was super happy with my test," Ots said. "Donatus was warmed up; very, very supple. I really tried to push it a little bit more in the piaffe and passage today; I was a little conservative the other day. I'm really happy with it. I made a mistake in my ones, I didn't connect him going into it, but he just tried his heart out, right until the end. It was super positive; really, really fun."

Reserve Champion honors went to Emily Wagner (La Cygne, Kan.) and her own WakeUp (Wagnis x Maiden Montreal/Macho). The nine-year-old American Warmblood stallion improved upon her performance on Thursday to best the field in the Championship Class with a score of 70.042% and finish on a an overall score of 69.324%. WakeUp also received the Highest Place U.S. Bred award.

Katie Riley (White House Station, N.J.) and her own 10-year-old KWPN stallion Zanzibar (Consul x Juventafee/Farmer) secured third-place honors with an overall total of 67.585%. On Saturday, they cruised to 67.583% to earn third place in the class.

Fifteen entries contested the Five-Year-Old Championship, for which the first 40% of their score was earned in the  Five-Year-Old Preliminary Test on Thursday. With the remaining 60% awarded in the Championship Class on Saturday, where combinations performed the EI Five-Year-Old Final Test.

Kelly Casey (Livermore, Calif.) entered the Championship Arena with her own Emilion SA (Painted Black x Karisa/Landwind II B) knowing that with a strong performance she could claim her first National Title. She did just that, scoring 8.720 in the Championship Class to finish on an overall total of 8.680.

The KWPN gelding impressed the judging panel on Saturday with his fabulous gaits, including his trot and canter, as he was rewarded a 9.0 for each. The gelding also received a 7.9 for the walk, an 8.7 for submission, and another 9.0 for general impression.

"He's got such a good brain. He came all the way from California and he brought is A-game, for sure," Casey said. "He's powerful, he's athletic, and he tries super hard. We didn't have mistakes. I just rode him in his comfort zone and I think the judges appreciated the way he used his body and his up-hill way of going."

Patricia Becker (Wadsworth, Ill.) and Edward (United x Jolina/Damiro) earned the Reserve Champion title in the FEI Five-Year-Old Final Test, as they finished on a score of 8.56 for Saturday, and an overall score of 8.520. Joan Pecora's KWPN gelding was awarded 8.8, 7.7, and 8.9 for the trot, walk, and canter, respectively. He earned an 8.5 for submission and an 8.8 for general impression.

Anna Marek collected third-place honors with AJ Stapleton's Elian (Sir Oldenburg x Barliane/Santano) on an overall score of 8.140. The KWPN gelding received 8.5, 8.4, and 7.8 for the trot, walk, and canter, respectively. He also was awarded 7.8 for submission and 8.2 for general impression, to finish on a score of 8.14 in Saturday's test.

Fifteen of the best horses from the 2010 foal crop completed the USEF Dressage Test for Four-Year-Old Horses for a second time to earn the remaining 60% of their championship scores.

Carly Taylor-Smith (Malibu, Calif.) and Rosalut HF (Rosenthal x Legacy/Salut) turned heads throughout the week, winning both classes, to be named the Four-Year-Old Champion on an overall score of 8.956. Nikki Taylor-Smith's Oldenburg gelding was the winner of Saturday's class with a score of 9.04, in a performance made all the more impressive because they competed after a long break as a thunderstorm passed.

Taylor-Smith and Rosalut HF have only been partnered together since February, but nonetheless were able to earn top marks. On Saturday, the gelding's gaits were regarded highly, scoring 9.3, 8.4, and 9.4 for the trot, walk, and canter, respectively. Additionally, he received 8.8 for submission and 9.3 on general impression. The pair also received the Highest Place U.S. Bred award.

"My test on Thursday was really good; he was really easy. We had a really steady connection and he did everything I asked," Taylor-Smith said. "I was a lot happier with that test than today's test. Today he was a little bit on fire. I don't know if he was grumpy because I brought him out late, or maybe I rode him for too long. I don't know if he heard something, but I could really feel like he was going to buck. But he kept his cool."

Earning Reserve Champion honors was the KWPN mare Famebria DG (Idocus x Valeska DG/Krack C) with rider Willy Arts (Hanford, Calif.) on a score of 8.468.The pair was finished second in both classes, receiving 8.7, 8.2, and 8.7 for its trot, walk, and canter, respectively, in Saturday's test. Natalie Bryant and DG Bar Ranch's mare also earned an 8.4 for submission and an 8.7 for general impression.

Stacey Hastings (Mooresville, N.C.) and her and Ronald Woodcock's Furst Aurum (Furst Romancier x Kapela/Rohdiamant) collected third-place honors on an overall score of 8.296. The Oldenburg gelding received an overall score of 8.48 on Saturday, with scores of 8.6, 8.0, and 8.4 for the trot, walk and canter, respectively. He earned an 8.6 for submission and an 8.8 for general impression.