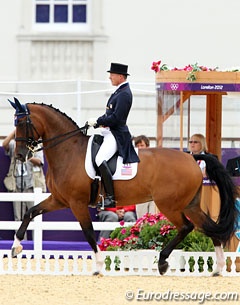 Ebeling, who is part of the Short List for the 2014 World Equestrian Games U.S. Dressage Team, had originally been slated to ride Beth Meyer, Ann Romney, and Amy Ebeling’s Rafalca in Grand Prix competition at Fritzens and shipped his horse directly from the U.S. to Sissy Max-Theurer's yard in Achleiten, Austria, to spare Rafalca from the a long lorry ride from the U.S. training camp in Belgium.

However, the Argentinus x Rubinstein mare sustained a minor injury and it was decided it was in the best interest of the horse to withdraw her from the weekend’s competition.

"However the combinations still remains in contention for the 2014 World Equestrian Games U.S. Dressage Team," wrote the press office of the U.S. Equestrian Federation.