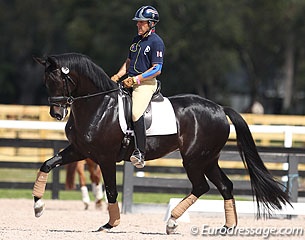 The United States Equestrian Federation (USEF) will be represented by three combinations at the 2014 World Championships for Young Dressahe Horses to be held 6 - 10 August 2014 in Verden, Germany. The United States will be sending one 5-year old and two 6-year olds to Verden.

Horse and rider combinations on the USEF Young Horse Dressage Short List are eligible to represent the United States at the 2014 World Championships if they have earned a minimum overall score of 8.0 or higher in designated USEF Selection Events or via international qualification.

Two five year olds scored above 8.0 on average. However, Ashley Luca-Tyson and Sans Soucis K (by Sir Donnerhall I x Florestan) have opted not to travel across the Atlantic to Germany. They had an average of 8.048.

The qualified combinations competing in Verden for the U.S.A. are: