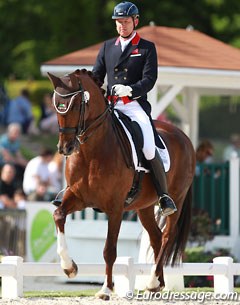 Great Britain's Gareth Hughes and Daniel Sherrif made the big tour at the 2014 CDI Compiegne in France a British affair, winning the Grand Prix, Grand Prix Special and Kur to Music. Blessed with gorgeous weather, the CDI Compiegne on 29 May - 1 June 2014 once again enthused competitors, judges, spectators and aficionados with its beautiful setting, well run organisation and fantastic joie-de-vivre atmosphere.

Hughes' biggest contenders were Belgian Françoise Hologne-Joux on the Dutch warmblood Wodan (by Gribaldi), who achieved two Belgian A-team scores with her 70.680% in the Grand Prix and 71.094% in the Special. Australian Mary Hanna is in Europe on her pre-WEG campaign and steered her Sancette (by Sandro Hit) to a third place in the Grand Prix (69.920%) and a second in the Special (71.745%). 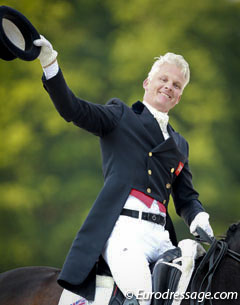 In the Grand Prix Special the scores of only four judges counted towards to total average. The fifth judge, Russian judge Yuri Romanov, became ill during the class and had to retire from judging. All his results were dropped from the final tabulation.

Daniel Sherriff and his 15-year old Westfalian stallion Dallaglio (by Laurentianer x Potsdam) were fourth in the Grand Prix with 69.040% and aced the kur to music on Sunday with 72.525%. Portuguese Filipe Canelas and his Westfalian gelding Der Clou (by De Niro x Matcho AA) were second in the freestyle with 71.250% followed by France based Estonian rider Grete Barake on the nomen-est-omen horse, the 14-year old Dutch mare Talent (by Lennard x Voltaire).

Photos © Astrid Appels - NO REPRODUCTION ALLOWED (NO FACEBOOK!! If you want to use the photo, buy it)

Eurodressage's Astrid Appels was on the scene taking photos of (pretty much) ALL riders at the CDI Compiegne. Contact us if you are interested in photo prints, collages or albums.