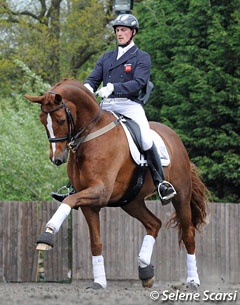 Eilberg and Farouche were the clear winners with 70.79%. They were over 10% ahead of the second-placed combination in a class of five. The chestnut mare won the gold medal at the 2011 and 2012 World Young Horse Championships in Verden.

When Eurodressage asked Eilberg about his future show plans with Farouche, Mike replied, "I dont want to do much competition with her until she is really ready for that new level stuff. I have been using the time to play around with a bit of everything. She did her 1st  one tempi changes the other day. They were just two but they were huge! I was smiling all day after"

Eilberg has also been lightly showing the PSI price highlight Der Designer, the 8-year old Hanoverian bred stallion owned by Moscow based Russians Elena Knyaginicheva and Russian eventing rider Georgyi Rtischev. Michael received the ride on the stallion in the spring of 2013.

"He had a great start to competition," Eilberg told Eurodressage. "He has been out three times at Advanced Medium and got 79% in all three classes with a 9.5 for paces. Looks good for the future."