Skowronska's With You Sold to Germany 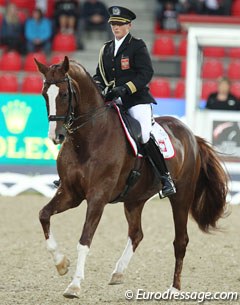 Zaneta Skowronska's Polish Grand Prix dressage team horse With You has been sold to the Frankfurt based German young rider Laura Reinke.

With You is a 13-year old Hanoverian by Weltregent H out of Dorothee (by Donnerwetter). The chestnut is bred by Gretus Buss in Verden, Germany, and was acquired by Polish Grand Prix rider Zaneta Skowronska at the Hanoverian auction in Verden as a youngster.

The duo represented Poland at the 2006 World Young Horse Championships in Verden, where they finished 16th in the 5-year old Consolation Finals. The pair made its international Prix St Georges level debut in 2008 and moved on to Grand Prix level in 2009.

Sponsored by the company Salmag, Skowronska was able to quality With You on the Polish team for the 2013 European Dressage Championships in Herning, Denmark. They finished 56th in the Grand Prix. After the Europeans in August the sponsorship ended. Skowronska last competed With You at the 2013 CDI Zakrzow in November after which the horse moved to Germany and got sold.

Laura Reinke's father Hans Joachim, chairman of the Union Investment Frankfurt, acquired With You right after the Europeans for his daughter to compete at Young Riders and later on Under 25 level. Laura is trained by Swedish Michelle Hagman, who is based at equestrian centre Wintermuhle near Frankfurt.

Aboard Red Pearl (by Royal Blend x Wolkentanz I), Laura Reinke started competing internationally as a junior in 2010. In 2013 she also campaigned Donnington Park (by Damon Hill x Mister A) and Raikano's Son (by Raikano x Werther) at M and S-level.