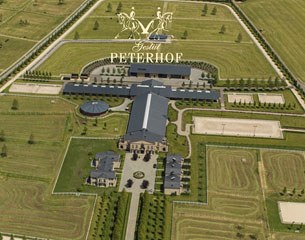 Edwin and Arlette Jasper-Kohl's state of the art equestrian facility Gestut Peterhof in Perl-Borg, Germany, will become the training base for the German team that will compete at the 2014 World Equestrian Games in Caen, France, in August 2014.

For the third consecutive year, Peterhof will be hosting a CDI 4* and the event has been incorporated in the German selection plan as mandatory event for team qualification towards the final selection trial at the 2014 CDIO Aachen on 16 - 20 July 2013. The 2014 CDI Peterhof takes placce on 26 - 29 June 2014.

After Aachen, the selected German WEG team riders will gather at Peterhof for a training camp in preparation of the World Equestrian Games.

German team trainer Monica Theodorescu came up with this idea at the 2013 CDI Perl-Borg. "The conditions are wonderful here; totally fabulous," said Theodorescu. "And it also fits in the travel logistics as we can travel straight from here to France."