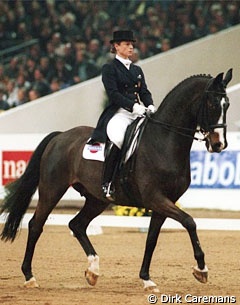 Right before leaving for the 2013 CDI Salzburg in Austria last weekend, Werth had to make the difficult decision to put her beloved Grand Prix horse to sleep. Six years ago the Argument x Wenzel I was already operated on for colic and since then he has always been quite sensitive to his gut when the weather changed.

"This time he just didn't have the strength to pull through one more time," Werth explained. "His heart was too weak and he wouldn't have survived another operation. We wanted to spare him from that. I'm comforted by the knowledge that after his retirement from sport, Antony still had eight beautiful years in retirement and that he was able to spend them here at home."

Isabell Werth started the young Antony herself at Dr. Uwe Schulten-Baumer's yard. The pair went through the levels, starting in the riding horse tests and moving all the way up to Grand Prix. He achieved 90 victories in his career and was always the wing man in the 1990s of Isabell Werth's Gigolo, who competed at most of the major championships.