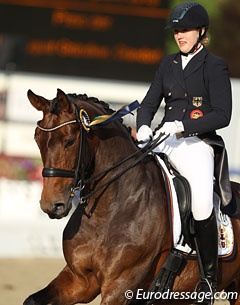 On Friday the bay mare stumbled and fell during a lunging session and severely injured her hock. She was immediately examined by the veterinarians who diagnosed her with a fractured hock. Unfortunately, the injury was too severe and the decision to euthanize her had to be made.

"I can't believe that this happened," said a bereaved Krieg. "I'm unbelievably sad. I'm so grateful to have had Flo in my life."

Krieg and Florence were members of the gold medal winning German team at the 2013 European Junior Riders Championships in Compiegne, France, this year. They also placed 12th in the individual test but were the fourth ranked German pair so did not move on to the Kur Finals.  At the 2013 Preis der Besten in Warendorf, Germany in May, the duo were the reserve champions.

The bay mare Florence was initially discovered as a youngster by U.S. Grand Prix rider Cesar Parra in Germany and acquired by Parra's sponsors at the time, Carolyne and Jackson Morgan. The mare, however, returned to Germany and in 2012 she sold to Jessica Krieg. Florence was the centre of a legal dispute between the Morgans and Parra for several years, but the case recently got settled.