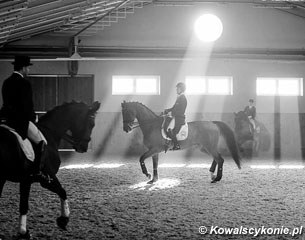 Heike Kemmer, Pia Fortmuller and Elena Sidneva snatched the trophies in the big tour classes at the international indoor competition held in Zakrzow, Poland, on 8 - 10 November 2013. The Zakrzow CDI was well attended by riders from Scandinavia, Germany and East European countries competing at all levels from ponies up to Grand Prix.

German Heike Kemmer won the Grand Prix for Special as well as the Special aboard her 14-year old Oldenburg bred Quantico (by Quattro B x World Cup I x Shogun xx). The pair scored a winning 68.830% in the Grand Prix and boosted that score up to a 70.167% in the Special.

Kemmer's student Pia Fortmuller landed first place in the Grand Prix for Kur. Aboard the 17-year old Dutch warmblood gelding Orion (by Jazz x Consul) the Canadian achieved 68.340% to top the leader board. Fortmuller, who has lately been getting some coaching from Jonnny Hilberath as well,  also finished second in the freestyle with 72.000%.