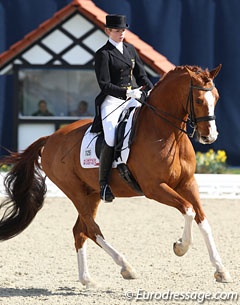 The soon to be 25-year old German Grand Prix rider Kirsten Sieber has been unable to compete in her last Piaff Forderpreis finals in her career. The blond rider injured herself right before take-off to Stuttgart and was unable to ride.

The Dortmund based Sieber and her Holsteiner gelding Charly (by Chagallo x Calvadur x Latino) were one of eight German Under 25 riders qualified to compete in the German U25 Championships, called the Piaff Forderpreis, at the 2013 CDI-W Stuttgart on 14 - 15 November 2013.

Trained by Klaus Balkenhol, Sieber was one of very few riders able to compete in her fifth (and last) Piaff Forderpreis finals this year, but had to withdraw on the scene.  While loading her lorry at home, the tack closet fell on her foot. The rider iced the foot, ground her teeth and made the drive to Stuttgart for the show but upon arrival it was too painful to ride.

Sieber went to the hospital to have her foot examined and X-rayed and was diagnosed with a fracture. She will have to take a break from riding for four weeks.