New Dressage Tests for 2014 Online, Piaffe Coefficient Will Have Major Impact on Results 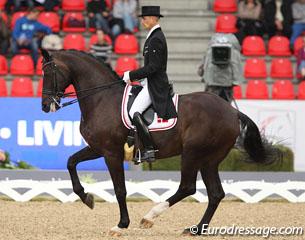 The International Equestrian Federation (FEI) has uploaded the new FEI level dressage tests which will become effective as of 1 January 2014. Two brand new "medium tour" tests have been instated and a minor change has been made to the Grand Prix and Special test, which has major repercussions for the sport

For the small tour no changes were made so the Prix St Georges and Intermediaire I remain intact.

The FEI is proud to post the two brand new "Medium Tour" tests, which should bridge the gap between Intermediaire I level and Grand Prix level.  As many horses do not have the absolute talent to do a Grand Prix, or are still green and inexperienced at the highest level, the medium will provide a solution. It will also be a good transition for young riders moving to senior level. For the moment the new tests are called Intermediaire A and Intermediaire B but this name can still change.

The piaffe in the Grand Prix and Special has received a coëfficient of 2, putting more value on the score of the piaffe.

While this revision seems minor it will have a major impact on the sport as horses with a good piaffe will now get the advantage to score a full percent higher in the 2014 Grand Prix test due to this new co-efficient.

Eurodressage will be featuring a column soon by score analyst David Stickland of Global Dressage Analytics, who will detail the effects this coefficient has for the future as well as could have had on the past. Had the 2013 European Dressage Championships been ridden to the 2014 GP test, a totally different country would have won gold, for instance!

All updated tests can be seen here.