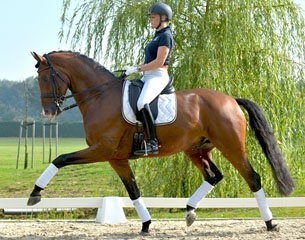 The 2013 Equine Elite auction was, like each year, a sell-out event and one of the guests claimed ownership over the bay gelding at a knock down price of 350,000 euro.

The second most expensive horse in the auction was the 12-year old Dutch warmblood gelding U Rockstar (by Jazz x Welt Hit II) which did its first Grand Prix competitions under British Maria Eilberg this year. The black gelding sold for 235,000 euro.