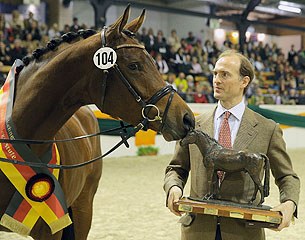 The group of mares on show in the Holstenhalle were well worth seeing and lit up the eyes not only of the judging panel. Helmut Mayer (Trakehner IG Austria), Matthias Werner (Trakehner Stuteneintragungskommission) and Martin Spoo, Breeding Director of the Rhinelander society, however, had the task of choosing between seven specially selected Trakehner mares.

“Prima inter pares“, this year's champion mare was Tanzmusik, who already boasts the coveted title of champion mare for the Schleswig-Holstein/Hamburg breeding region. The state premium mare, emphasised Martin Spoo in his role as commentator, is “a truly special horse and the type of champion one doesn't see all the time – she has all the attributes of an exceptional mare”.

Tanzmusik is by Trakehner stallion Herzruf out of Tanzsport by Grafenstolz. She is bred and owned by the Hessische Hausstiftung Panker. Tanzsport achieved a first-class mare performance test and embodies the Trakehner traits of nobility and athleticism. Prince Heinrich Donatus von Hessen, director of the Hessische Hausstiftung, looked proudly as the brown Trakehner mare proved herself to be a true lady, even during the grand presentation ceremony.

The reserve champion was state premium mare Alte Zeit (by Le Rouge out of Alte Art by Kasparow). “A noble horse and a mare whose quality of movement is in a league of its own,” said Spoo. The dark brown, elegant beauty is bred and owned by the Sächsische Gestütsverwaltung in Graditz.

The committee selected two reserve champion mares. Both were remarkable in their elegance, character and quality of movement. Kasandra (by Axis out of Karlotta by Lehndorff's) is owned and bred by Herbert-Stefan Schümann, Kirchhain, while Schnessprinzessin by Elfado out of Schneeflocke VI by Michelangelo calls Gestüt Tasdorf home.  Her breeder is Udo Koch, Tasdorf. The excellent team of mares received rapturous applause during the lap of honour.