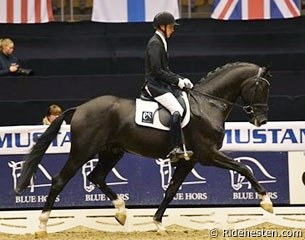 The 4-year old Sezuan, the 5-year old Svalegards Hottie, and the 6-year old South West Rocazino became the grand winners of the 2013 Danish Young Horse Championships held during the 2013 CDI-W Odense in Denmark on 15 - 17 October 2013. The young horse classes were being held in Odense the days before the international event and as they were scheduled on mid week days seats remained quite empty.

Danish judges' favourite Sezuan (by Zack x Don Schufro) left no doubt about it that he was going to take the title in the 4-year old division. Presented with much expression by Andreas Helgstrand, the dark bay stallion performance test winner scored a winning total of 9.680 points. With his steady cadence in trot he earned a 10 for the gait. For the ground covering walk he got 8.9, the well balanced canter earned him a 10 and with another 9.5 for rideability and 10 for potential Arlette Jasper-Kohl and Andreas Helgstrand's Sezuan was untouchable. Anna Kasprzak became the reserve champion aboard the 2012 Oldenburg saddle licensing champion Furstenstein (by Furst Romancier x Hohenstein). She scored 8.960 and referred Dorthe Rohmann and Jakas Don Louvre (by Don Romantic x Lauries Crusador xx) to a third place with only a fraction of a point more. Kasprzak scored 8.960 and Rohmann earned 8.940. 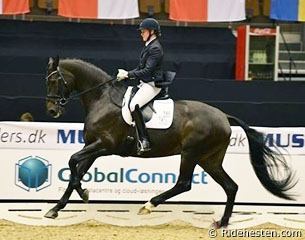 Blue Hors stud rider Maria Anita Andersen and the black mare Svalegards Hottie (by Hotline x De Noir) kept their consistent form, which they also showed at the 2013 World Young Horse Championships in Verden in the summer. The pair topped the leader board with 8.980, earning 9.2 for trot, 9.5 for walk, and 8.8 for the canter which was a bit crooked. With an additional 8.2 for rideability and 9.2 for potential Hottie aced the 5-year old division. German Maik Kohlschmidt and the Danish bred Zick Zack Toftegard (by Zack x Don Schufro) were the runners-up with 8.680, while 2013 World Young Horse Championship silver medalists Andreas Helgstrand and the Oldenburg stallion Floricello (by Florencio x Dormello) got bronze in Odense with 8.560. The stallion kicked to the spur, which made the score drop for rideability to 7.9. 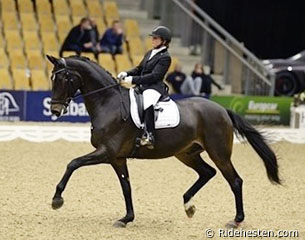 In the 6-year old division the petite Bettina Laisbo steered the tall and elegant South West Rocazino (by Don Romantic x Latimer) to victory with an 8.820 total score. The horse's cadenced trot earned him 9.2, whereas  the walk improved during the test (7.8). The canter was uphill and ground covering with good balanced and good flying changes (9.2). Laisbo received a 9.0 for submission and an 8.9 for general impression.  Maria Anita Andersen took the other two medals: silver with Cavanillas W (by Florett As x Donnerhall) on 8.680 points and bronze with  Katholts Bossco (by Don Schufro x Michellino) on 8.600 points.